Lotuses are beautiful, but can you actually live with one?

WE GET TO DO SOME PRETTY EXOTIC ROAD TESTS IN THIS AUTOMOTIVE REPORTING BUSINESS, and I am usually given the assignment "find out what it's really like -you know, take it shopping, commuting, traveling and just keep it in your own garage for a while." This test began when we were offered a new Lotus to "live with." Now Lotus Cars Ltd. produces some of the thoroughestbreds around - this we all know. We also knew that the Lotus crest may be seen traveling everybody's highways on several varieties of road cars, but we had figured that these "road" cars out of Lotus were pretty special machines and unforgiving ones at that. Visions of Jim Clark in a hurry, Chapman himself with neck scarf flying, and FIA graded drivers had always prevailed when we gave thought to what a Lotus might be like as an everyday form of transportation.

The top can be put up by one person - but I should hate to be caught in a rain storm.
In truth - I was a bit wary of this assignment. Getting around New York City and its environs is naught but a nightmare gymkhana anyway, and now I reasoned that running this course in what had to be a thinly disguised out-and-out race car was going to be either asking for a ticket or at best (!) an uneven battle between the Lotus and me just to keep the revs up and keep the car on the road.

But the day came and we were introduced to the latest "tame" Lotus, handed the keys, shown where reverse was, and instructed to "have a good time with it" as its owner departed via taxi. And thus we met the Lotus Elan, eased into same, took off with a slight chirp of tires (it has a very responsive clutch) and within 20 miles, we found out two delightful facts. This is not a citified "race car"-it is a genuine sports car (of the old school type of sports car, where one does all their own driving and has fun in the process) and if there was any car that would do its best not to go off the road this was it.

The Elan is a potent little machine. It weighs about 1500 pounds and is powered by the twin overhead cam English Ford 109 mill now bored out to 1600 cc, equipped with a new light alloy head and called the Ford 116-E. This is the same type of engine used (in 1500 form) in the first unbeatable Lotus 23s, and (at 1600) this was the engine that took an English Ford-Cortina to within an incredibly few seconds away from Corvette time at Bridgehampton last Fall. In other words, the Lotus Elan can go like blazes if you want to (0-60 in eight seconds, 120 mph if you're really in a hurry) and with disc brakes all around, it stops pretty well also.

What it is like to drive this car can be summed up in one word - fantastic. Living with it depends upon what one wants in a personal mode of transportation. The Elan is an enthusiast's automobile, for you are definitely in charge of all its driving. Its interior is token plush in the form of spartan "luxury" features such as windows that must be pulled up by hand, the ashtrays in the doors are vestigial, and the well fitting bucket seats are for paying attention to driving, not relaxing - all of these features being frosting on the cake of this phenomenal machine.

Mind you, the Elan is a comfortable road car. Its all-around independent wishbone suspension provides a just right degree of hardness to the way it rides, but at the same time you will not feel as if you'd just sledded down a washboard if you happen to hit rough pavement. The way this car handles must really be experienced to be believed. No matter what you are doing-making tracks around a corner, trapped in a constant radius curve going a little faster than you had planned, or just darting through traffic -the impression (and the fact) is that all four wheels are attached flat to the ground, and that is where they intend to stay.

Although the cockpit is very comfortable, one gets a hemmed in feeling at times.

The Elan is a very good looking little roadster. The unique steel backbone chassis (it looks like a double inverted arrow) is encased in a sleek glass fiber body shell that features such niceties as true wraparound foam-filled bumpers (also glass fiber), retractable headlights, and an engine hood that pops up automatically (if not a little startlingly) and can be completely removed in seconds.

The Lotus is a small car, standing only 43 inches high, and in driving around the city, it suddenly occurred to me how very tall taxicabs were. Trucks remained their normal size (being weaned on an MG TD, I'm used to looking at wheel bolts and running boards), but I did occasionally get the feeling of being walled in when surrounded completely by Cadillac fins, vast expanses of Lincolns and even some of the larger "compacts" while sitting enmeshed at a traffic light.

When the light changed it was a different story, of course. The healthy clutch responds instantly, and the Z-F transmission is synchromesh into all its four speeds and is so quick that the observation was made that it's not a gearshift lever at all - it's a switch.

We took this car shopping, and found that although the luggage compartment is not vastly large, it would take a reasonable amount of grocery bags, cleaning, and what all else must be carted around. We went touring in the rain and found that the pull up windows protect but allow a slight enough amount of drops in to remind one that this is a sports car. We also found that the "insert braces, hook on rear, button down sides, spread canvas" top is not quick raising but not impossible either.

We let a few friends try it and were informed that more space could have been provided between the floor pedals, but the Elan's seats and steering wheel seemed to just "fit" all sizes of people. 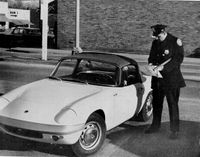 ....but I never realized that they had speed limits in a parking lot, so naturally....

We struggled with the umbrella handle type handbrake (Why Colin - why?) a few times and then gave up and did without it. We were impressed with the "services" offered by the switches on the very neat wood dashboard (including windshield washer, panel light rheostat, and cigarette lighter) were luxuriously warmed by the heater, soothed (if that's the word) by the "I mean business" exhaust tone, and fascinated by the smoothness of the five-bearing engine.

I sprinted, cruised, stopped short, started fast, played games, drove sedately -I "lived" with the Elan and I began to get very fond of the Elan.

We, we do drive a variety of new cars when we're roadtesting. We pick them up, live with them for a bit, and then give them back. Sometimes it can be a chore and we are delighted to have done with them, but on other occasions we are really sorry to turn back the keys. On this occasion we were sorry the most.

Dear Santa, I realize I haven't written for ages. However, something has just come up that I thought I ought to tell you about...