Cornering is the real forte of the Elan. Here it takes a tight, reverse-camber turn in stride.

Note the unusual door cutout that allows easy access to the semi-reclining seats.

Both beautiful and business-like are the lines of the S2 coupe, shown in living red. 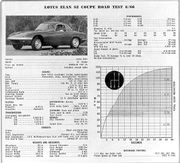 Trunk area is small, due to gas tank, spare tire, and battery being in this area, but access Is good, and interior fully carpeted. 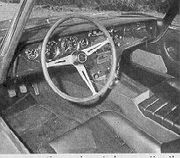 Instrumentation and controls are attractive straight-forward, and efficient. Pedals we too small and close together for our liking

Pop-up headlights are actuated by a re vacuum cylinder and work very well. Wheels are pin-drive and knock-off. 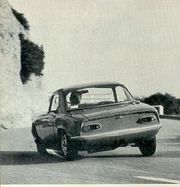 Understeering through a tight corner, above, the Lotus indicates how good the tire-bite is by the amount of lean. 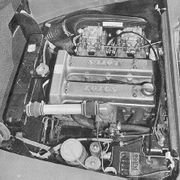 IF YOU ARE FAMILIAR WITH THE LOTUS ELITE, the quickest way to visualize the Elan is as a logical updating and improvement of nearly the same concept. To be blunt, the Elan is not everyone's "cup of tea." It is a car for the enthusiast's enthusiast. In many ways it's a very expensive toy ... a toy to be enjoyed by very knowledgeable drivers, and those enamored enough with modern and somewhat exotic machinery to overlook its more practical shortcomings. As a Lotus representative allegedly put it, "If we sell one of these cars to Joe Average motorist, we're in big trouble!" For the price, there seems relatively little danger of this occurring. If it did, we'd have to agree.

There is no major difference between the first Elan and the S2 model, just detail improvements to make it quieter and more docile. It is an exceptionally light car (1282 pounds at the curb) with a 1.6-liter engine (the Cosworth-designed twin-cam head on the Ford 120E block) that develops 105 horsepower. The result is a horsepower/weight ratio of 12.2-to-1. Combine this with a first-rate sophisticated suspension system and a streamlined, low-frontal-area body, and it becomes apparent you are going to wind up with maximum roadability and performance. Then mix in the Lotus logic in driver packaging and controls-design (with the annoying exception, in this instance, of foot controls) to assure good comfort and driveability. We got the impression that Luxury what there is of it - was an afterthought taken into consideration when they figured out what the retail price of the vehicle was going to be.

As our test unit was one of the first coupes to arrive on the West Coast (thus having zero mileage), we borrowed an S2 soft-top from Bill Young's La Canada Sports Car Center to obtain performance figures. There's very little difference in body lines and the top, including the electric-operated windows, adds under 100 pounds to the weight, so the figures should be nearly identical. It was our first trip in an Elan (SCG's Blunsden did the initial test in England) excepting our test of Young's race car last year. A short time after we picked up his car we were on the phone to him: "You flake! You forgot to tighten the U-joints!" Ignoring our diplomacy, he countered that he had forgotten to tell us how to drive it. And we had some choice comments about THAT remark. What was under discussion was the "rubberband effect" of the rubber donuts used as inner joints on the rear axles. Accelerate or stop at a rapid rate, and you can feel these joints compress and unload, transmitting a very discernible lurch. It requires extremely smooth clutch release and throttle application to control. By the second day of driving, this smoothness became pretty much automatic and we ceased to be annoyed by the wrap-up, but it remains a factor under very hard braking and, for around-town use, requires that the engine be in an excellent state of tune to enable the smooth take-offs. But Bill was right; you have to learn to drive it.

The 1548-cc engine is, as we stated earlier, a twin-cam conversion of the strong Ford 120E ex-pushrod four cylinder. Despite a relatively high power peak, it has good torque on the lower end. Fed by two dual-throat Weber DCOE-40 carburetors, it is almost over-carbureted and requires delicate adjustment of idle and linkage settings. Once this is accomplished, however, the engine will tick over below 1000 rpm, and pull from 1500 rpm in high gear providing the throttle is reasonably feathered. It is a very quiet powerplant and has an almost timid exhaust note. Gas mileage is quite impressive with the light car; an average of 25 mpg, which also makes the relatively small fuel tank (12 1/2 gallons) no bother.

Behind the engine is basically a Cortina close-ratio gearbox with special shift-linkage modifications. It's really great fun to shift, due to the extremely short lever and tight pattern. The lever is mounted on the high center tunnel (remember, the Elan frame is a huge, boxed sheet-metal "X"), close at hand, and shifts with an audible "click-click" of its detents. Full synchromesh, it's really beautiful.

Handling, of course, is the real forte of the Elan. Without a G-meter comparison with other machines, we'd venture that it has the best side-bite of any production car in existence. At one point we sailed through what would normally be an 85-mph banked sweeper and glanced down to see an indicated 105 mph on the speedometer. Slip-angles were barely discernible! This extremely good bite and light, rapid response is very much like a first rate small Modified or Formula car. This could even be a dangerous trait in the hands of an unskilled driver, as the complete feeling of security at horrendous velocity could easily lead him into BIG trouble before he realized it. The attitude is light understeer at high cornering speeds, almost neutral. In tight corners, the understeer becomes stronger. The stopping power is very good and very stable, but not quite as quick as we expected in view of the sensational handling, and the fact that it has big, four-wheel disc brakes. Perhaps this is due to the relatively narrow-profile tires used, yet there is not an abnormal tendency to lock up the wheels on hard deceleration.

The body lines and general appearance of the Elan are very likable. To keep the sleekness, pop-out headlights are used. These are operated by vacuum cylinders that instantly open or close via a separate switch. If the headlights are not turned on when they are in the UP position, a relay automatically makes them blink until they are. Yet they can be turned to DOWN, with the sealed beams concealed within the bodywork and the light remains on. It seems like they should work just the opposite. The cockpit is very comfortable, with semi-reclining buckets and relatively easy entrance by virtue of a long forward cutout in the door shape. The small steering wheel is ideally positioned and, with 2 1/2 turns lock-to-lock, the response is very positive. As we carped earlier, the pedals are both miniaturized and close together. There really is adequate room in the footwell, so the size and spacing appears illogical to us. It's not impossible to hit two pedals at once, even with our size 7 1/2's. Instrumentation is Smith's; nice, round, legible gauges. Most of the switches are toggle type, mounted on the polished wood flat dash. Visibility is excellent, except that a sideview mirror is a must, due to the proximity of your head to the left side of the hardtop. A unique feature on the relatively spartan Elan coupe is electric windows. The soft-top has high-quality pull-up type windows with a small latch to lock them in the desired position. The electrics really seem out of place.

Trunk room is pretty small. You can get one good-sized suitcase in, plus a couple of small kits, but that's about it. Below the trunk platform is the spare tire and tool kit. The gas tank and battery are also in this rear section.

Our total impression of the Elan coupe was quite enthusiastic. It has the looks, the roadability, and the ride qualities that make it an extremely pleasant car to own. It certainly fulfills the requirements of basic transportation while being an exotic, fully-independent-suspension, light, high-performance machine. Mainly, you describe the Elan with a three-letter word: FUN. You can rationalize much of its high cost in durability under abuse which it certainly appears to have - the general low operating costs, and the high-quality engineering that went into it. As we said, though - it's a car for the connoisseur, not for the folks.