Indicating slight understeer the Elan sweeps through a turn like a small Modified. Note the magnesium knock-off wheels. 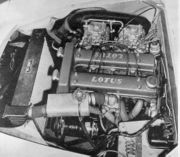 The twin-cam Ford is Cosworth-reworked to produce over 140 hp, and there still remains some room for further-but-judicious prodifving. Special cross-flow radiator is used, carburetion - by two side-draft Webers. 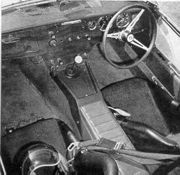 The cockpit is one of the most comfortable and functional we've ever sat in, by virtue of excellent controls-location and firmly-supporting bucket seats.

The hub accepts four pins that screw into the wheel. Fabricated suspension arms are very light.

TO TAKE ADVANTAGE OF SCCA RULES, Lotus is marketing a race-prepared version of the Elan designated as a 'GT'. It costs around seven grand, but comes with a host of goodies and a Cosworth rework that would cost considerably more if you tried to convert the stock Elan. We were afforded the opportunity of testing the first one in this area through the courtesy of one Bill 'Smilin Willie' Young, a BMC and Lotus dealer in La Canada, California. Bill swapped his front running MG Midget for the Elan and has already torn big holes in his C-Production competition. Aside from a thinner body shell and other weight-reducing items, such as an alloy bellhousing that brings the curb weight down to 1,250 pounds, the main change is the Cosworth prepared engine that develops over 140 horsepower. Young feels that a bit of extra clean-up work they've done on the ports and combustion chambers has tacked another five ponies on top of this. Thus they can put the Elan on the grid with the very impressive horse power/weight ratio of 8.3-to-1.

The chassis has been reworked a bit as far as spring and shock rates are concerned and caster/camber setting have been altered. Pin-drive magnesium knockoff wheels are an included item. Willie admits it took a few test outings for sorting out to get the car raceworthy, but point out that this is to be expected when you order am- machine that is essentially a race car.

But the raw material is certainly there and he and his, mechanic, Hal Lynam, have well managed to extract the potential. At Willow Springs, a week prior to our test, Bill managed to buzz around Merle Brennan's rapid E-Jag (then in 3.8 form) like a horsefly after its quarry. Even with compression down in one cylinder, due to a tired piston, the Elan was only a slight bit slower on the chute.

Our test took place at Riverside and, though we expected to be impressed, we were still surprised. The Elan GT goes, handles, and stops with the ease and lightness of a top-notch G-Modified. Matter of fact, Bill bettered the GM times by almost two seconds a few days later at Pomona. They are using Caldwell recaps and, if such a thing is possible, this combination gets almost too much bite. At high speeds it lines through the corners like a Junior - just great - but there was a bit of "squeegee" effect in the tight turns that made it difficult to hold a really positive attitude. While almost dead neutral in handling character, there is a slight tendency to understeer in the slower corners. You sometimes wonder if the engine is really up front, as it handles very much like a rear-engined car.

There's really not a whole lot more to tell. It's a proverbial baby carriage to drive. Thoroughly enjoyable. Maybe we can sum it up by saying it's as good as the Lotus 30 is bad? That's quite a compliment.