Flying over a "Thank-you-M'am," left, and peering from under the minimal top, our road tester obviously enjoyed his evaluating sojourn in the much sought after Elan.

Main unique features of the sensational Elan are the "backbone" chassis, the DOHC-converted Ford engine, and the retractable lights in the fenders. 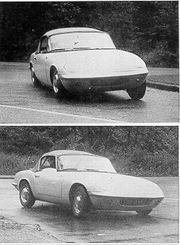 Cornering the Elan on a wet surface, Blundsden reveals the slight understeer and soft suspension. Note an apparent toe-out in turns. This would seem to follow in examining the steering geometry evident in the bottom photo of the front suspension and rack-and-pinion steering 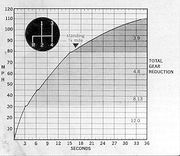 IT MAY BE AT LEAST PARTLY TRUE to say that the more difficult a commodity is to obtain, the more desirable and valuable it becomes. But the scarcity of Lotus Elans has no real bearing on the desirability of the car. It is a frustrating by-product of a somewhat chaotic situation in and around Cheshunt, which in turn is a direct result of Lotus popularity and success in so many fields.

The Indianapolis enterprise, the development of the Lotus Cortina (and especially of the twin-cam engine which powers this car and the Elan), the productionizing of a monocoque racing car (the Lotus 27) and the fielding of a works racing team have all been happening at the same time. Small wonder that not every activity has been carried through on schedule or without any hitch.

The Elan production is one of those which has suffered. Initially the problem was shortage of engines, due to a batch of faulty castings, then of production capacity as other urgent activities took precedence. Finally, as the first cars came off the line, a number of quite small but nevertheless important defects were noted and acted upon. Design mods were rushed through, and meanwhile there was a natural reluctance to produce many Elans before the improvements could be 'built in' on the production lines.

Now, the leeway is being made up. Elans are coming off at a steady rate, and they are considerably better cars as a result of their late arrival. But demand for them is so great that not even one test model has been snatched from the factory. Consequently, this report is based on a car which started life as a demonstrator and subsequently passed into private hands. It is an early model, and was originally supplied in component form in Britain, thereby being relieved of the burden of Purchase Tax. It has the 1,499 cc engine, whereas later models are being turned out with the 1,558 cc unit, and it was equipped with the normal Ford gearbox, with fairly wide-spaced ratios, when tested. Also, the carburetion was uneven, resulting in some hesitation on pick-up, and consequently, the performance figures quoted in the accompanying data panel should be considered as very conservative, and capable of betterment by a considerable margin with a car in full tune and with the latest specifications.

With these points made, let there be no doubt that this was still a delightful car to drive. The Elan is fundamentally such an excellent device that imperfections, such as incomplete draft sealing around the top, and stiff door windows (they slide up and down in guides along their leading edge), are overlooked or accepted for what they are-teething troubles of an early production car.

To imagine the 'feel' of an Elan it helps to have driven an Elite. The new car has a similar lightness of control and preciseness of handling, but without the Elite's harshness at the back end. It is quite a softriding car, and for example there is a fair amount of up-and-down movement from the body when taking a 'hump-back' bridge in a hurry. But there is by no means excessive body roll when cornering, and the car goes round the bends as though on rails.

Basically, the car as tested was giving a mild amount of understeer when pressed hard, but on a wet road it was possible to check this very easily by putting on just a fraction more steering lock. When switching quickly from one lock to another the amount of steering wheel movement must be controlled carefully so as not to induce too violent changes in direction and consequent unnecessary body 'rock.'

The suspension set-up is carefully chosen to give a firm enough ride for really fast motoring without making the car unduly sensitive to rough stuff at low speeds . Over indifferent road surfaces it feels a much more rigidly constructed car than the Elite (which it is, of course!). For this, we have to be thankful for the deep and immensely strong backbone chassis, to which the reinforced glass-fiber body is bolted as an entirely separate unit. This form of construction has also cut out a lot of the mechanical noise which, on the Elite, is transmitted through the body-chassis structure into the cockpit.

When tested, the Elan was equipped with Dunlop SP tires, which gave it a standard of adhesion which was almost uncanny. The car could be aimed through bends with complete confidence and great precision, and this, coupled with brakes which few cars on the road could better, makes it a delightful two-seater for long-distance touring. This is really effortless driving, aided by a driving position which I found very much to my liking, and a control layout which has obviously been carefully thought out.

The slim-rimmed three-spoke steering wheel is at just the right angle, and there is adequate freedom for arm movement. In the straight-ahead position, the wheel gives a clear view of the matching speedometer and rev counter (which has a warning red are, starting at 6,000 rpm). These dials are flanked by a combined oil pressure and water temperature gauge, and a fuel gauge. Hand controls and toggle switches are laid out in a central console, which blends in with the transmission tunnel and helps to make the dash a stressed part of the body 'unit. A luxury touch is given by the oiled teak facing to the dashboard, which is set off neatly by the matt black trim and padding. The gear shift is ideally placed in its own 'tray' let into the top of the transmission tunnel, but the handbrake is less well positioned, under the dashboard.

Although the individual seats do not give a lot of sideways support, they are comfortably raked, giving reasonable support behind the knees, and mate up with padding over the central tunnel to give some lateral location.

The foot controls are placed sufficiently far to the right (on a right-hand-drive version) to allow sufficient room for the left foot away from the clutch pedal, and brake and accelerator can be operated simultaneously. All three pedals have quite a light action, the clutch being smooth in taking up the drive, and the brake pedal full of 'feel.'

The smoothness of the five-bearing Ford engine needs no stressing - it is already well enough established as one of the smoothest production power units in its class in the world. In 100 horsepower form, as fitted to the Elan, with twin Webers and a 9.5 to 1 compression, not forgetting the exciting twin-camshaft aluminum head, it feels as smooth as a turbine as the rev counter needle swings into the red. There is no sign of stress even when 7,000 rpm is used, but 6,500 rpm is a better limit, and certainly sufficient for maximum performance in the indirect gears. At 6,000 rpm, the power comes through so effortlessly that this can be considered the car's natural cruising speed - in other words, just over 100 mph in top gear -while at 5,000 rpm (85 mph in top) the Elan feels as though it will carry on all day if it had enough gas.

The Porsche-type synchromesh on the all-synchro box is tough enough, yet light enough, to satisfy the most ham-fisted and mechanically unsympathetic driver.- It takes a lot to beat this one! The only trouble with this box on the Elan is that with the standard ratios second is a lot too low, giving a maximum of only 46 mph. A close-ratio box, as offered, is highly desirable for a car of this caliber.

Luggage stowage is always a problem on a sports car, but the Elan has a reasonable amount of capacity. The trunk holds a fair collection of soft baggage and the space behind the two seats can also be brought into use. There is an open compartment on the passenger's side of the dashboard, and the doors are well designed to give small compartments just ahead of the pull grips.

With the top up, all-round visibility is very reasonable, and wind noise is low except for around the rear of the doors, where there were a couple of small air gaps (this being one of the jobs which Lotus have been working on). Twin releases in the center of the dashboard free the hood lid, which is front hinged on nylon, and springs up slowly to give good top-end serviceability of the power unit. If necessary, the hood can be removed completely in a few seconds. The ingenious concealed headlights can be switched in daylight to give warning flashes; current consumption of the swiveling mechanism seems to be quite high - a deterrent against playing around with them when the engine is switched off!

There is an understandable tendency to think of any Lotus as a racing car, but the Elan, though doubtless destined for a happy time on the circuits (the first British cars are being developed with promising results) is first and foremost a high-performance touring car. With this in mind, it has been given a standard of finish and trim hitherto not available on a Lotus, and in its final, fully productionized form, it is a highly desirable product.