Dubbed "the most important sports car of 1962," the sleek Elan is loaded with unique features. 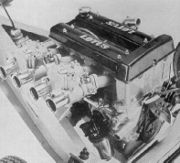 Tasteful and compact, the fibreglass body contributes to the rigidity of the central-beam frame. 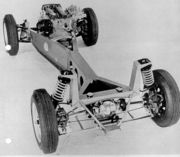 A departure that led to Chapman-built monocoque car, this unit has little weight advantage but is extremely high in strength.

FROM BOTH COMMERCIAL AND TECHNICAL STANDPOINTS, the Lotus Elan is the most important production car to be designed and marketed by Colin Chapman's Cheshunt-based factory.

It is easy to talk about the backbone of the Elan, for its chassis is just that-a 11 1/2 inches deep 18-gauge steel double backbone, with appendages which act as attachment points for the front-mounted engine, clutch and gearbox units, the rear-mounted differential, and the suspension unit;. The glass-fiber body molded in five pieces, is an entirely separate unit, and is bolted to the chassis at sixteen points.

The engine is a production development of the unit used in Jim Clark's Lotus 23 at Nurburgring in May 1962 for the 1,000 Kilometers race. It is basically the 1,498 cc four cylinder Ford unit, with five-bearing crankshaft, as fitted to the Consul 315 and Capri, but with a special twin overhead-cam shaft cylinder head developed by Lotus from a design by Harry Mundy.

There is an almost constant build-up of power throughout the rev range, the following figures having been seen on the brake:

The cylinder dimensions remain unaltered from the standard Ford specification of 80.96 mm bore, and 72.75 mm stroke, which gives the 1,498 cc displacement. The firing order is 1-3-4-2, and the twin overhead camshafts are driven by a single-stage roller chain.

Separate inlet and exhaust ports, of course, are provided for each cylinder, and the inlet manifolds are cast integrally with the cylinder head. There is a 12-volt ignition system, and 14 mm long-reach spark plugs are used.

The rotor-type oil pump is mounted externally, and maintains full pressure to the main, big-end and camshaft bearings. There is a full-flow filter, and the system has a capacity of 7 1/2 U.S. pints.

The dual twin-choke Weber 40 DCOE carburetors, equipped with replaceable-element air cleaners, are fed by mechanical pump from a 12 U.S. gallon fuel tank. The pressurized water cooling system has a capacity of just under 17 U.S. pints.

The transmission units are Ford throughout, being taken, like the bottom half of the engine, from the Consul 315. This means there is synchromesh of the Porsche type on all forward gears, and a really slick shift mechanism.

There is an interesting story behind the development of the backbone chassis of the Elan. The prototype frame was built up three years ago, and when tested it was found to have no less than six times the stiffness of the then current multi-tube frame of the Lotus Formula 1 car. It was this discovery which first set Colin Chapman thinking about monocoque construction for racing cars, for there was obviously little to choose between the two types of construction in terms of net weight!

Some interesting detail work has gone into the design of the frame, which was the work of Mike Costin, before resigned from Lotus to rejoin Keith Duckworth in the company he helped to form - Cosworth Engineering. The base of the frame, for example, is an elongated 'U' section member, the recess of which acts as a neat housing for the exhaust pipe, which is thereby kept well clear of the ground, and largely out of sight.

There is also a novel arrangement for supporting the final drive unit. This is attached to a transverse beam, which in turn is rubber-jointed to the rear crossmember of the chassis by means of vertical studs. Fore and aft location of the axle is by a pair of radius rods running forwards from the unit and pinned laterally into the sides of the backbone. The axle housing is also rubber mounted to the 'U' section bottom frame member, and carries the inner bearings of the final drive.

This is perhaps the most interesting part of the transmission. The hollow drive shafts carry three-prong forgings at either end, coupling them to rubber units, similar to, but slightly smaller than those used in the final drive of the Formula 1 Lotuses. The Elan, therefore, has four of these units, one on each side of the final drive unit, and one at the outer end of each drive shaft.

Immediately outboard of the outer rubber units are the Lotus-designed 10-inch disc brakes, these in turn being placed well inboard of the alloy hub carriers.

The rear suspension is of the strut type, incorporating high-mounted Armstrong telescopic shock absorbers within coil springs, and fitted with rubber buffers at the top end. The base of the hub carriers are attached to extremely wide-based wishbones, with double fore-and-aft bracing which in turn are linked to the chassis through Metalastic metal-and-rubber bushes. The very small variation in lateral movement of the wheels caused through suspension movement is absorbed by the four rubber units.

The front suspension, by means of compact wishbones and small-diameter coil springs encircling telescopic shocks, is a refinement of the system used on the Lotus Elite. The outboard front disc brakes are 9 1/2 inches in diameter, and are recessed into the wheel rims. Once again the Triumph rack and pinion is used, in modified form, for the steering giving 2 1/2 turns of the 15-inch wood-rimmed wheel, lock to lock. Lotus have designed special high-speed steel wheels, with four-stud fixing, and these are shod with 5.20 x 13 Goodyear tires.

The five-piece body consists of the body, trunk lid, engine hood, and the doors-and the body section is probably the most elaborate one-piece moulding yet to have been achieved for car production. One of the most interesting detail features concerns the headlamp arrangement, the lights being recessed under swivelling covers when not in use. Double dashboard switching is provided to raise or retract the headlamps, which are coupled to vacuum cylinders, which in turn are coupled to a vacuum reservoir, the whole system being operated by manifold vacuum. When locked in the raised position, the lamps comply with the regulation distance from ground level to the center of the glass, and a finger-tip flashing control is built in. The lamps cannot be left on in the retracted position, or remain off when they are raised.

Another unusual feature is the use of foam-filled glassfiber bumper bars, which are said not to crack, dent, or bend under minor impact. The weatherproofing arrangement is also unconventional, in that it includes a PVC fabric soft top, and separate clip-on glass-fiber cant rails, which surround the side window apertures, and carry the support rails for the top. A PVC strip along the front of the soft top is recessed into the top of the windshield, and a solid rail below the rear window panels secures the top to lugs on the body. Finally, there are the usual clip-on fasteners to seal the minor gaps.

The carpeted luggage compartment at the rear has a useful size by sports-car seats, this extra accommodation being sufficient to take a baby basket.

The cockpit of the Elan has been very well thought out indeed for the enthusiast driver, and the general standard of finish is definitely more acceptable than on the Elite. The oiled teak dash panel, which is itself a structural member of the body, has a deep center section extending down to the body floor. Matching rev counter and speedometer are straight ahead of the driver, with a combined oil pressure and water temperature gauge to the right, and a fuel gauge to the left. Dual hood release catches are placed high up in the center of the panel, where they can be reached by a driver wearing a safety harness, and the control switches are arranged neatly in the center section of the dash. An open glove compartment is provided on the passenger's side.

The seats have a good range of adjustment, and the backrests are raised slightly as the seat is pushed forward. The interior is fully trimmed in Vynide, and fully carpeted, and has the general appearance of being a coach built job. There is nothing spartan about the Elan, Chapman having realized that today the discerning buyer is not satisfied with performance alone. One feature not often seen these days, but one which has been used very successfully on a number of cars within the last few years (including the Austin A3b) is the vertically sliding door window, with transparent plastic "pulls" mounted centrally close to the top edge. The engine hood is front-hinged, and is carried in nylon runners; it can be removed completely in about 10 seconds.

This, then, is Chapman's best-by-far production car to date. The Elan, with its five-bearing, high-torque and extremely smooth 20HC engine, its all synchromesh gearbox, and rubber cushioned final drive, its all-round independent suspension, precise steering, and powerful braking, must surely be the smoothest-running and safest handling sports car ever to have been produced by a British factory. In fact, so saleable is its specification - particularly in view of its price-that it must surely rate as the new sports car of 1962.