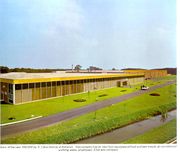 As you read this presentation brochure about Group Lotus, we sincerely hope that it will enable you to become even better acquainted with our rapidly expanding organisation.

As you know, we have earned an internationally famous reputation for our racing successes and the quality of our high performance touring cars. Today, 95% of the Lotus Group is employed full-time on the design, development, manufacture and servicing of the Lotus Elan and Lotus Europa range. The remaining 5%, by their successes and failures on the track are accumulating the experience needed to produce the next generation of Lotustouring cars, which like those currently in production, will be based on components and design techniques which have been proved in racing all over the world.

Touring cars are our business, racing is our ultimate proving ground and our most powerful publicity medium.

If you have never driven a Lotus may we recommend an early test drive.

THE OFFICES The spacious office covers over 20,000 square feet. It is based on the German Bureau Landschaft scheme which greatly increases efficiency, cutting down paperwork and improving communications. Careful attention to acoustic absorption has resulted in quiet working conditions for the 140 office employees from Directors to the newest recruit.

PRODUCTION Modern production line techniques combine with all the care of the individual craftsman to produce a steady and ever increasing flow of the new Lotus models. Each car is driven on a 30 mile road test after passing many rigorous quality and reliability tests during production.

ENGINES Heavy engineering equipment makes light work of the precision which goes into manufacturing the Lotus twin cam engine. This engine has now been in production for five years and over 10,000 of them are in current use all over the world. Many other highly skilled engineering and machining operations, from the manufacture of chassis to the assembly and tuning of racing engines, are carried out quickly and efficiently on the premises.

QUALITY AND RELIABILITY are nothing new to Lotus -earning this comment from the Editor of a national motoring magazine "The most reliable car I have ever owned". Such acclaim is not easily earned and today Lotus is committed 100 per cent to the pursuit of perfection in everything connected with its cars, its service and its business development.

LOTUS COMPONENTS LIMITED still uphold the original tradition of racing car manufacture. Over eight types of racing car are produced from the inexpensive new Formula Ford to the successful Type 47 GT. Each car is hand-built by Lotus craftsmen, many of them with years of experience in the motor racing world. The internationally famous Racing Simulators are also manufactured by this Company.

LOTUS SERVICE LIMITED care for Lotus products all over the world. Those who live near the factory can bring their cars in for careful attention and repairs. Others further afield or overseas receive rapid shipment of parts and service information, usually by air. From a glassfibre body section to the smallest nut and bolt, Lotus Service is ready and equipped to keep the customer happy.

Announced initially in "Special Equipment" 118 bhp form in September 1967, this car is a true 2+2 with adequate space for two adults and two children. Based on developed Lotus Elan 2-sealer components it retains the now famous Elan handling and safety combined with a 120 mph top speed and economical fuel consumption. Super-Safety steel backbone chassis, 4-wheel independent suspension and disc brakes all round. Electric windows and radio are standard.

" . . . . one of those rare and memorable tests that have dictated a re-appraisal of some of the standards by which we must judge and assess all future cars." "THE MOTOR"

" . . . . this Lotus is extremely easy to drive, with light, accurate steering, formidable roadholding, and a most forgiving nature-insurance companies should give special cheap premium rates for such a fundamentally safe car as this." "AUTOSPORT"

" . . . . the ultimate in Elans no doubt, this version has much more space especially in width, than the original two sealer. I liked it very much for its driving position and light preciseness of controls." "THE AUTOCAR"

Now in its fifth year and with over 5,000 already in the hands of satisfied owners, the Elan "Coupe" will be in production well into the 70s. Both the Fixedhead and Drophead versions can be purchased in 105 bhp form or to the 115 bhp "Special Equipment" specification with extra safety, luxury and performance. Steel backbone chassis, ELAND-2 suspension and braking, electric windows, knock-on or bolt-on wheels.

" . . . . Most of our drivers voted the Lotus Elan one of the year's outstanding test cars and perhaps the best sports car we have ever driven". "The Motor"

" . . . . there can be few faster ways of A to B motoring than in a Lotus Elan and we found that there are even fewer ways in which we can enjoy ourselves so much in the process". "The Autocar"

" . . . . one's first surprise about the Elan is its amazing docility . . . it is a car which keeps young men young and makes old men younger and is one of the few cars which can average 69 without exceeding 70". "Motor Sport"

Designed especially for the export market this outstanding new model was selected by the Council of Industrial Design to represent "the best of British automobile engineering in 1967" at the Brussels Exhibition. Based on the Lotus backbone chassis design pattern the Europa is powered by a 82 bhp 1600 cc engine and gearbox giving 115 mph top speed and outstanding fuel economy. It has recently been described as "the best handling car in the world today" a title once given to the Lotus Elan !

" . . . . the machine feels right, is practical in the sense that you can get in and out and find somewhere to put your baggage and that the roadholding makes it one of the quickest point-to-point cars yet devised". "CAR MAGAZINE"

" . . . . handling and cornering ability are truly wonderful . . . even at 100 mph conversation is possible without shouting . . . we realised just how good the Europa ride is, especially on pave of the worst type", "AUTOCAR"

The ratio of staff to the unit output of the Lotus Organisation has constantly been improving since 1963. Whereas in that year one person would 'build' only approximately two cars, today he is putting out five cars per annum.

Lotus production and sales increases have been running at approximately 40% per annum for several years with each additional new model achieving new production build-up records. Lotus cars are exported to 40 overseas markets.

TEAM LOTUS, World Champions in 1963 and 1965, Indianapolis Winners in 1965 and always up among the winning cars. Led and inspired by the Chairman, Colin Chapman, this team has achieved unparalleled successes in the field of international racing over the last decade, frequently setting the pace and the design trends with a never ending flow of new designs and strategies. Their team-work and attention to detail set the standards throughout the factory.

A. C. B. CHAPMAN, B.Sc., F.R.S.A. Born on 19 May, 1928, Anthony Colin Bruce Chapman was educated at London University. He obtained an honours degree in Science (B.Sc.) then after serving with the Royal Air Force joined the British Aluminium Company as an Engineer. He built his first car in 1948 and started the Lotus Company in 1953. Now Chairman of the Lotus Group, he designs and carries out all the duties of Chief Engineer and controls both racing and touring model development. Married with three children, hobbies motor racing and private flying.