Having recently acquired a 1968 built Plus 2 (UK spec) I plan to return the engine bay to as close to factory as possible. I will definitely be fitting a new wiring harness as there are a lot of bodged crimp connectors that I hate. Other than that and obvious things like the HT leads and coil and there doesn't appear to be a coolant expansion bottle unless it's been located down inside the nose, what else should I be looking to change ?. 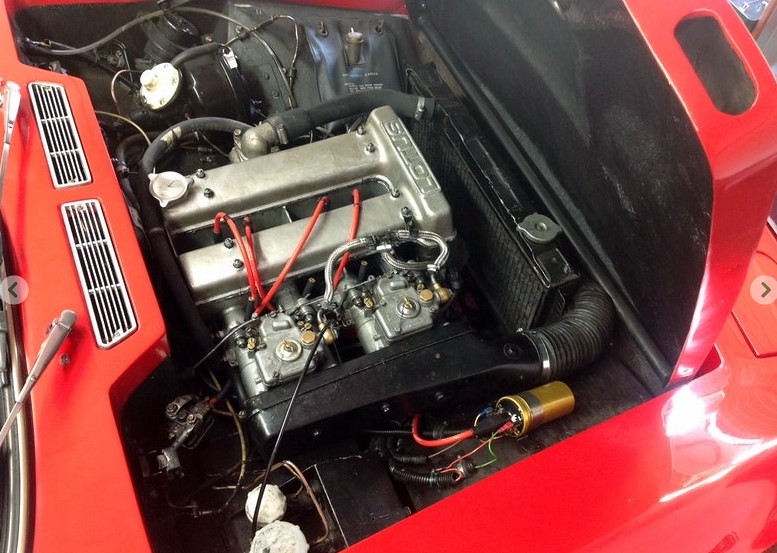 As you are asking for help I would suggest you make more pictures of your engine bay, one picture only can't cover all details you might want answers for.
Take them from several sides and angles, the sides of engine, into the front left, front right. And with some light. A picture of a black hole isn't helpful.
1964 S1 (at paint shop)
1967 S3 DHC
1969 S4 FHC (at BB's home)

Yes I will do, I only uploaded the one picture I currently have, I will upload more/better when I get time.

If you wish return the engine bay to as close to factory as possible, one obvious change would be to replace the Lockheed brake servo with an original Girling unit. However, no benefit other than aesthetics.

davidj wrote:If you wish return the engine bay to as close to factory as possible, one obvious change would be to replace the Lockheed brake servo with an original Girling unit. However, no benefit other than aesthetics.

I think I would leave the servo as is but I will remake the horrible spaghetti brake lines. One thing I wasn't sure about is the cam cover. Should it be bare alloy or painted ?. I will be painting head, block etc. grey but wasn't sure about the cam cover. I presume there should be a radiator expansion bottle to the right of the radiator ?. Another one is an electric cooling fan. It doesn't have one but I'm not sure if it should for a UK car of this build date.

Some Plus 2 owner will be along in a minute to advise on what type of fan was fitted originally. Is there an otter switch on your radiator as that could be an indicator.
If you do want the advantage of an electric fan but keeping everything looking period, Lotus did do an electric fan that fitted onto the front of the full width radiator like yours. It was a very basic set up with a smiths motor and a token plastic blade stuck on. It straddled the complete width of the radiator and bolted onto the side panels.
As long as your radiator is in good condition it should keep everything cool except in slow traffic. Its then deciding if original fan is good enough or you need something more modern and better.
Clive
1972 Elan Sprint FHC

I haven't checked yet if there is an otter switch. I don't desperately want to fit an electric fan, I'll ensure the cooling system is properly flushed and that the radiator is in good condition first then see how it performs. I presume there should be an expansion bottle though.

Here is my Jan 1968 +2 engine bay. All parts are original other than the original Marston radiator, which I had recored by Coolex; Fat Boy 3 core with otter switch and fan.

It still has the original single blade fan fitted and the coolant exspansion bottle is in the nose. You can see the tube from the Radiator going over the Air Filter trunking.

Very nice indeed, if I could replicate this I would be very happy indeed. Is the cam cover colour supposed to be indicative of the engine spec'?. Please excuse the obvious questions, I've spent 40 years working on minis, this is a new departure for me and I would like to get the details as close as I can to OEM.

Here's another pic of a completely std mid '68 Plus 2 engine bay before I started the resto.

Mine too has the original 2 blade fan running off the waterpump pulley, and its original servo Thank you, another good reference. Mine still has the two blade fan and I think the radiator could be original as it is embossed Stanparts on the header so is presumably a Standard Triumph item.

111Robin wrote: Is the cam cover colour supposed to be indicative of the engine spec'?.

Yes the Cam Cover varies for the different engine combinations. i.e. early, late, big valve, type of cam and which carburettors fitted, etc.
This is all documented in Miles Wilkins, Lotus Twin Cam Engine book. Which is a highly recommend book and is now available again.
Regarding your Cam Cover, it should be Red crackle finish. I painted mine with VHT Red Wrinkle spray can.

Also you do appear to have an original Radiator.

Thanks Trevor,
Items I will be looking for from an initial comparison are :
Air filter housing (mine is missing, intake hose is connected to a conical filter in the nose)
Washer bottle to replace the "colostomy bag", although the non original servo may prevent its correct placement
Coolant expansion bottle

I would consider swapping the servo out for the correct item but presume these are scarce ?
Wilkins book on order.

Tee Jays car is a really good one to copy, couple of things different from my 1967 plus 2 though.
The brake pedal box doesn’t look original, the early ones didn’t have the removable access plate on top.
My wiper motor was actually mounted in the same area but on the vertical surface of the inner wing.
My air horns were pointing down on the vertical face of the left hand wheel arch under the headlamp pod alongside the air horn compressor. So slightly different form Tee Jays.

Not saying Tee Jays car is wrong, just that with Lotus things changed over time.

As said by others, the original fan was a two blade metal one on the water pump, later ones had an electric fan on a tubular support frame in front of the radiator. Very early air filters were mounted differently, but the workshop manual shows to reposition it as shown in the photo. These filter housing are available from various lotus parts people, one tip, the filter element seems to be slightly too thick and there is a thread on here somewhere showing how to trim some foam off the seal area so it fits better. Two vacuum pods working the headlights individually was standard early on, and these were not failsafe, loss of vacuum equals loss of headlights so many people modified them to the American failsafe setup.

Looking forward to see how you progress with some more pictures.
Change is inevitable, except from a vending machine!

Thanks. I think my main goal is to make it as original as possible but retaining some of the modifications such as the servo and electric headlamp conversion. I'll be stripping everything from the engine and starting from scratch, particularly with the wiring as my pet hate are those blue crimp connectors everywhere.