Hi all, hope you are staying sane. What is the opinion on type and position when fitting an electric fuel pump or pumps to a +2 for a spot of sprinting? We have always used Facet pumps before, but have had a couple of failures on other cars. Suspect there may be a few very good clones coming in from you know where, difficult to spot though. Any suggestions received with thanks. Rob

There are lots of dirt cheap Facet clones around on Ebay. I've had a couple of the genuine Facet pumps fail over the past 4 years on my Alfa. The newest Facets pump at the same rate whatever the conditions, and don't regulate (ie go slower when the demand dwindles) like the older ones used to, which could be a factor. Imperative that you use a pressure regulator with them.
There's been a Bendix one on Ebay at the moment (Virtually identical to the Facets), and is NOS, so should self - regulate. They were fitted as OE on early SWB Porsche 911's.
https://www.ebay.co.uk/itm/Pierburg-Ben ... true&rt=nc
I would buy one of them in front of a modern Facet .

Thanks for that. Very little choice these days as everything has gone injection. I have a nearly new Facet which I ran on my old Porsche. It worked fine on there, so I think I will use that and mount a spare beside it. I have a box full of genuine used eighties Facet pumps which were only taken off to replace with new when we were running the race car. These new pumps which look like Facet items on evilbay and the like at under twenty quid are not worth looking at. Will keep my eyes open for the other pump type. Cheers, Rob

Please don't forget the Flow Rate.
I also own a classic TVR 1976 3000M and a 1978 TVR 3000S. Both Weber Carbs and thirsty V6 Engines no problem.
One has the lower presssure Huco and the other the higher pressure Huco.
Both cars have the Huco inside the Boot.
Both run perfect no problem.
For me it's a no brainer and i drive both cars no problems.
Alan
Alan.b Brittany 1972 elan sprint fhc Lagoon Blue 0460E

Hi all, had a quick look at the HUCO pumps on the net. Look very similar to the shape of the old SU pumps. As we are on with a MGB rally car as well and the SU is dead, may see if the owner wants to try one. There seems to be two types, a push and a pull. The PFP02 133010, would be ideal for the Elan as it is a pull type and could be mounted in the engine bay to save piping and wiring in to the boot. They say 2.2psi., so should be OK without regulator. Would fit a one way valve to stop any drainback. Could always upgrade to the other one if we find starvation problems with the Dellortos. We will always find a home for the unused one anyway. As the MG has its pump at the back we would need a standard push type for that. Probably a different part number? Thanks for the information. Will let you know how we go on with both cars. Rob

Thanks Alan. Just had an email back from the manufacturers confirming the PFP02 will be fine as a front mounted pull pump for the Elan. They have however recommended the PFP03 for the MG to give a bit more push from the rear of the car for the MG. As your V6 runs OK, can't see any problem with the MG. As long as everybody doesn't close down this week with any new lockdown, we will be getting both pumps and having a go. Rob

Good idea, don't see why they won't go for the extra few quid. We would normally fit the little in-line glass filter from Sytec. Think we'll fit them and argue about it later. Have just ordered both pumps for the jobs. Just have to find a good location for the Lotus one amongst the other stuff like ignition modules, coils and catch tanks. We'll figure it out. Might put some pics up in case anyone else is interested in the Elan job. cheers, Rob

I have a different pump but have it fitted by the pedal box. Fuel line comes up from tunnel into fillet and then pump, I a have 90 degree elbow that connects line to the rear carb and then front carb. On both of the "Huco" Pumps i have used rubber(cotten reel) mounting so no vibration.
This is on my TVRs.
Alan
Alan.b Brittany 1972 elan sprint fhc Lagoon Blue 0460E

elans3 wrote:The Huco pumps are ok, but the "low pressure one pumps at 2.1 psi, which IMO is not quite enough for a pair of 40 DCOEs at WOT. The other one pumps at 4.3psi which is just a mite too much , and again, in my opinion, would need a pressure regulator. DCOE's like to run at 3 to 3.5psi, and yes they will run at 4 +, but it hammers the needle valve into a depression on the brass float where the needle valve rests.

My take on low pressure electrical fuel pump is that if there is some positive pressure left at WOT, flow is enough for the given build, as there should not be any residual pressure in the bowl which operates at atmospheric pressure: to rest assured with my fuel pump flow, I've modified a fuel intake banjo bolt so that fuel pressure can be checked with a small gauge while the engine is running at max operating rev (last I checked there was about 1psi left from idle 2 +/- 0.5): 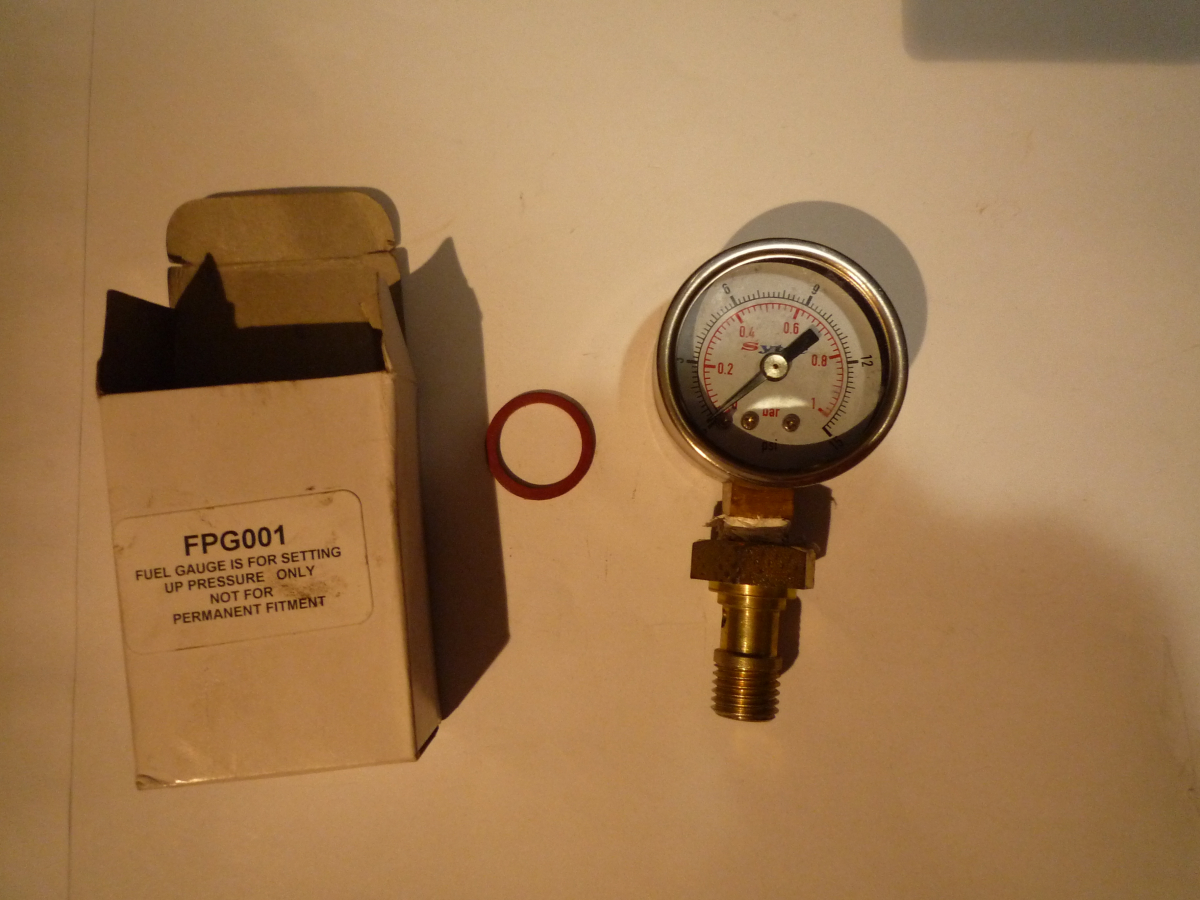 Hi Nmauduit,
i must admit that's the correct way to check it out.
I have been a bit lazy and never checked it like you.
cheers
Alan
Alan.b Brittany 1972 elan sprint fhc Lagoon Blue 0460E