I am not a scooter man myself as you can see by my twostrokes. I can appreciate the attraction of classic scooters though.
Would think that there are a few bikers and Mods on here. Easy to work on if your Lotus is getting you down.

I have a nice 73' Suzuki TS185 to finish. Think it may have been at the bottom of a lake in the US.
Also a US spec' 75 185 Ranger Suzuki with 10 speed box. And Electric start. Not started on that properly yet.
The guys in the US seemed to get lots of models we never saw in the UK. Plus there still seems to be lots still buried away in garages.

They sure are plentiful here, I could have had 1000’s of nice 60-70’s bikes over the years for cheap or free. But, there are only mountains to ride on here, and trials bikes are so much fun in the alpine.
I figure, as my uncle road across Canada when he was 78 on a 84 Shadow, I should be ready for the same trip. But, I like trials. So what’s the cross between a trials bike, and touring. Not a huge adventure bike, not a 450 dirt. The new 700’s appeal, like the T7. Pol Tarres seems to handle it well, I would need to practice more.
I do have a 1982 Honda PA50, as for collector insurance. One needs a year round licences vehicle. That’s as cheap as you can get insurance here.
Outside of the regular Beta, Scarpa, Sherco, and a Gas Gas or two for the kids and I. My fav is a 1986 TLR250R Japan market.
Born, and brought home from the hospital (no seat belt (wtf)) in a baby!
Find out where the limits are, and start from there
Love your Mother
Earth

I like trials too. Had not done it for about 30 years. Bad back. However went with son to a gathering the other week. I am not up to speed on new stuff. He has a nice classic Bultaco Sherpa. Had a go on that. Also surprised how nice an old well sorted Ossa Mar was. Enjoyed riding that too. Had them back in the day.
Newest thing i was on was a Gas Gas about 10 years ago. Very powerful.
Have been looking at the 80's Fantic 200 and the Yamaha Ty175. Figure my back would stand it. The TLR does look to be a quality bit of kit.
Hope to go on the so called "green lanes" on the nice light ts185. Nothing serious . Just for a crack. If we can find one that has not closed down.
Mike

Still my choice ripper is a 08 Sherco 2.9. Friends have the newer Montessa 300rr 4 stroke, and a 2017 Beta, both good. I am still hooked on the 2.9. The old mining trails around here, before I had motor bike. We built for downhill mountain biking. Now I get up, and come down on them on trials.
Quite the work-out, and very few pools to cool down in so the swimming pool works well once home!
Born, and brought home from the hospital (no seat belt (wtf)) in a baby!
Find out where the limits are, and start from there
Love your Mother
Earth

I started riding twenty years ago, so I'm still a n00b at it!

My first bike was a 1985 BMW K100RT that came to me by a lark in a conversation and it changed my life. The poor thing was however in derelict condition and had spent the previous 18 months uncovered under a tree. It required a major refurb which I undertook before I even knew how to ride it. Here's a gallery documenting the project: https://vegomatic.smugmug.com/Motorcycles/The-Brick/

I must have liked it, because BMW is the only brand I've owned to date.

The K100RT suffered a minor crash that trashed the fairing, and not long after it developed the dreaded starter-clutch failure. It got replaced by a 1995 R100RT, the final year of the air-cooled boxer for the US market. That one was OK for a few years but was a downhill relationship. It wasn't as reliable as I'd hoped, the ergonomics weren't very good for a person my size, and its low gearing meant that it wasn't very efficient for traveling. In 2007 I did a 3000-mile trip on it and an hour from reaching home a valve came apart and destroyed the top-end on one side.

A month later I bought a brand-new R1200GS, the great leap forward! The R100R was to be repaired and turned into a bit more of a cafe-racer but then when cash got tight in The Great Recession I sold it. My reason for a GS is not any ambition to conquer the unpaved world -I'm not into off-pavement much at all- but because it fits my tall physique better than anything else! And as it turns out, the GS is also a great sport-tourer.

Then in 2010 I crashed the GS rather badly. It was my own fault, the primary cause being dehydration. I broke my arm and the bike was written off.

At that point, since I can usually only afford one major toy at a time, I took a break from two wheels to pursue Lotus! I bought a 1986 Turbo Esprit, for which I'd lusted since 1981. Had a fabulous if trying four years with that, then sold it for a variety of reasons, and figured it would probably be my only Lotus since the things cost so much. Not long after that I decided to go back to motorbikes and found another R1200GS, this one being two years old but still like new with only 6K miles on it plus a bunch of accessories installed by the seller. Smashing deal and I didn't look back!

A year later, not in the market for anything at all, the chance to acquire a friend's much-neglected Plus 2 fell into my lap. I scraped some cash together and made it happen!

And I still have the GS! I had a 1961 Truimph Sports Tiger Cub a T20S to ride to the Dockyard for my Fitter Turner Apprenticeship.
I was a "Rocker" with Leather Jacket and ice blue Jeans lol.
Then i changed and bought a Lambretta 1965 SX200 new and became a Mod to do the Brighton Trips lol
Alan
Alan.b Brittany 1972 elan sprint fhc Lagoon Blue 0460E

Always been a two stroke enthusiast and have three at the moment. Two of them are lined up for long trips over the next couple of years. 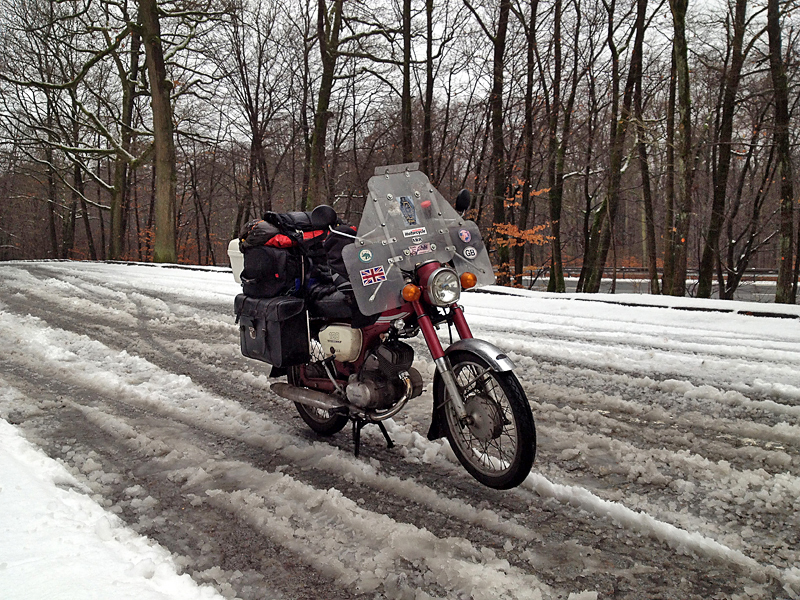 My 125 Suzuki on a winter trip through Germany 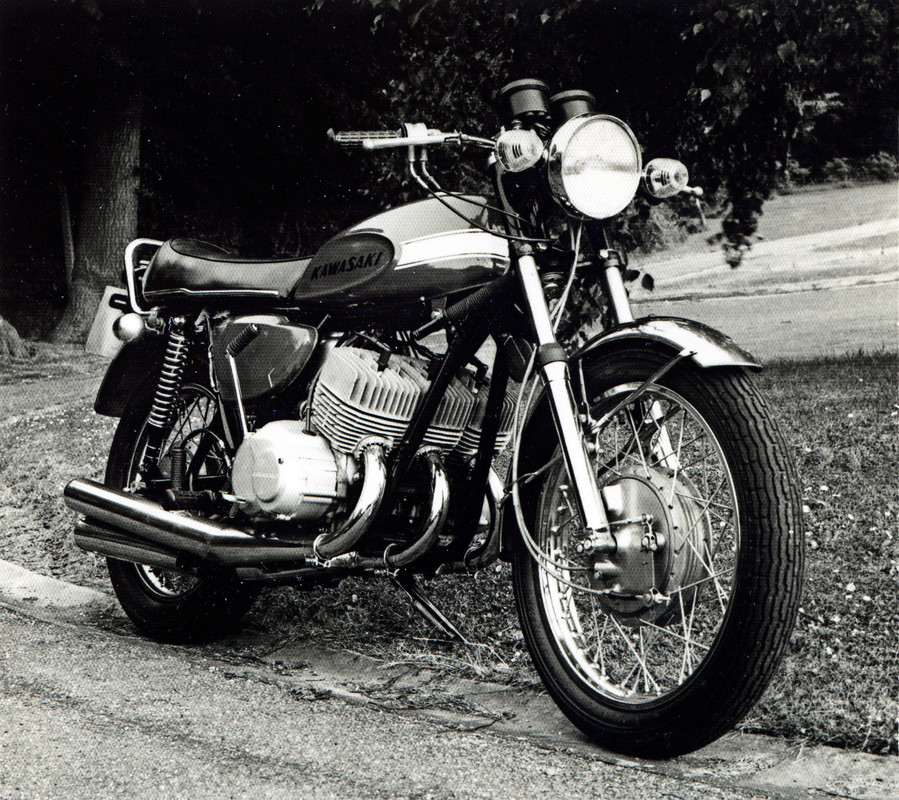 Arty shot of my H1 500 Kawasaki. Should have been undergoing restoration over the last two years but the Yamaha has taken priority.

It's not just two strokes though. Here's a couple of my 'more strokes' - 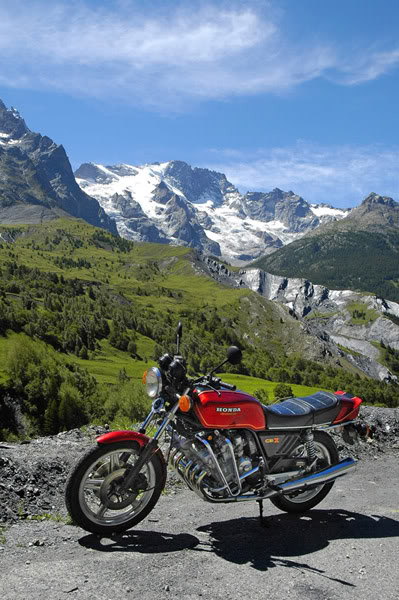 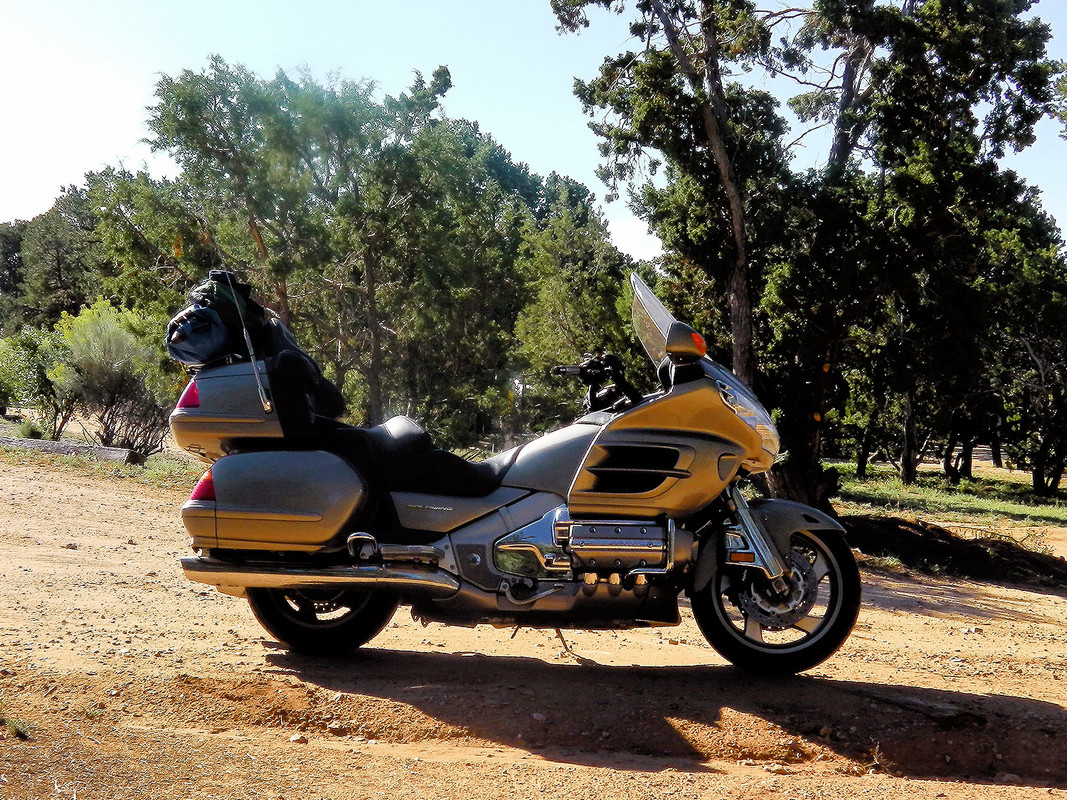 Honda GoldWing 1800 in New Mexico. Its been the biggest casualty of Covid as it should have been used for a few US trips over the last couple of years. Instead it's just sitting in a barn waiting until it's safe to travel again.
Stuart Holding
Thame UK / Alpe D'Huez France
69 S4 FHC
Honda GoldWing 1800
Honda CBX1000
Kawasaki H1 500
Yamaha XS2

Just had a proper look at the TLR250 R. That is different. Looks a bit like a crossover with a trail bike. Thin on the ground. The none normal TLR 250 seem to bring good money and are well respected, reading up. I do like those.
Perhap a newer trials bike would be better for me.
Agree about work out. Gets you a good sweat on.

Yeah BMW GS has a great reputation. Very usable. I have a RnineT scrambler which has had a lot spent on the suspension to get it right. Not good for a new bike. Was disapointed with the out the box set up. Nice bike though.

Tiger cub, never had on but mates did, I used to go to work on a Bantam. Could hear me ring ding ding for half a mile. Then the Yamaha RD250. Heaven for the time in 1975.
Hence the longing to restore the 71 Hustler.

Stuart,
Good that you appreciate the tiddlers, i like small bikes too. Great to see the B120 doing a big trip. Will post my TC120. Think we may have spoke about this last year.
I like the YDS. Is it a 6? Nice bike.
My mate had a YDS3 back in the 70's. Again wicked after riding the other stuff of the day. That blew up when a plonker changed down instead of up.
And a CBX. Very collectable. My good friend had one.

I.ve got a Honda CT70-H that I keep in the trailer to get around on at the track when were running the Lotus 20/22.
Its a 70 or 71 and still very original. At times in the paddock, the bike gets more attention than the Lotus.
Lot of "I had one of these when I was a teenager"

Now why won’t my engine start….

Roger,
I was not sure what one was. Thought it was like the CT90 trail jobby. Yeah, looks a neat pit bike. Very collectable. I remember seeing similar ones as a kid.
The old Honda 50/70/90 type engines are pretty bullet proof. Had loads of old pushrod type ones when teenagers. Lots of "two up" in the woods and on the coal tips. Who would have thought. All relative before sampling the start of the proper trials irons.
Todays kids would laugh.

Mark,
It is because you have not bought your parka yet and not got a hair cut like Bradley Wiggins or Paul Weller. Going to be a must with a Scooter. Then your mirrors and tiger tails.

Mark,
It is because you have not bought your parka yet and not got a hair cut like Bradley Wiggins or Paul Weller. Going to be a must with a Scooter. Then your mirrors and tiger tails.

And the lights - don't forget all the spotlights. Good job none of them ever worked because if the they did the battery would be flat in about 5 minutes.