Hi all,
following on from my post a few weeks ago about leakage in the headlamp vacuum circuit, I decided to go electric.
I took the whole vacuum system out and each bit was subjected to the 'bicycle tyre repair procedure' ie it was drowned in a bucket of water and air blown through to find the leak. Eventually found it in the push/pull switch.
By then I'd already bought two Ford Probe motors off ChEapbay.
With a small push pull electric switch and a changeover relay from a Auto Electric Supplies everything has gone together easily. Thanks to MikeD and various other Elan.net 'posters' who gave tips and ideas.

The small push pull switch needed a very minor tweek to fit the original knob. After complicated folded aluminium sheetwork, that never really worked or was strong enough, I used small ali brackets that are deceptively strong. The wiring surprised me, being very simple and sorted on the dining room table in less than 20 minutes! Two levers/rods came with the motors but wern't long enough so were cut and extended crudely. I'd like to do something a little more professional. The motor balljoint is approx 13mm and the long bolt from the pod is 5mm. ideally I'd like M5 rod with left and right hand thread with a ball joint on the motor and a rod end at the pod. So far I've been given a quote for M8 fittings for ?7 each from these people: http://www.springfixlinkages.com/catalog.htm but with a ?50 minimum charge applied. Still waiting from another firm who make throttle linkages. Any other suggestions out there.
Once the motors were in, the wiring in and connected, I noticed the actuating arms 180degrees out to each other - couldn't resist it...

Also attached a few pics of motors in and wiring - hope it helps anbody else contemplating the same. MikeD tells me his motors look similar but have only three wires and require another relay. Love the video. I've held off buying a vacuum pod as I'd prefer to get electric motors fitted. I'll keep an eye out for some motors.

Hi Sean, received a PM saying they'd tried this, his motors were Excel units (Toyota) and although they looked similar, required 4 relays.
For me motors were ?10+post, ?2 switch and ?3 relay, plus wire.

motors look identical to the mazda mx 5 motors I installed years ago on my plus two. Was a lot of work and fiddling but the result is perfect!
Can recommend it if your vacium system is stuffed!
cheers
Robin

Looks a really neat installation. I have thought about doing something similar on my car.

Was it difficult to get the length of the arm correct?

I assume the motor travels through part of an arc and then reverses?

I would be concerned that in the up or indeed down position the motor was not putting any strain on the pod hinge area to avoid stress cracking.

With reference to your improvised arms, in a previous discussion of this subject radio control model aircraft suppliers were mentioned as a source of rods and swivels.
John

then why not use the radio control servos as well?
would be great fun in a car park!
What could be more endearing then an elan winking when a nice looking person/car goes past!
Cheers
Tim

I have installed a similar setup on my car but it's not wired up yet. I tested with a battery tester and the individual pods seem to work, so I am hoping for the best.

My Mazda motors look identical to SADLOTUS's Probe motors, but then a Probe is just a badge-engineered Mazda so that's no surprise. They have the same four wires and I've wired them the same way, except that I chose to energize the relay off the light switch, eliminating the function of the vacuum switch (as well as the safety microswitch in the nose).

I made up the linkage out of nylon rod ends and 1/4" nylon rod, with a left-hand thread on one end. I got the bits (including a left-hand die) from McMaster-Carr in the US (mcmaster.com), a supply house for virtually any material, fastener, tool etc. you could ever want. It remains to be seen how durable this arrangement will be. One advantage is that the precise placement of the motor and the location of the rod end in the pod is less critical due to the flexibility of the rod.

The motors go 'round and 'round; they do not reverse. This means the stroke of the motor arm is fixed, so the placement of the rod end on the pod is critical. I found that I needed to place the rod end 7/8" beyond the existing hole for the vacuum pod arm, but your mileage may vary. It is also important that the line drawn between the pod attachment at its open and closed positions go through the extended center line of the lift motor drive shaft, and that the motor arm line up with the rod at its rest positions. Fortunately, the arm can be placed on the shaft with almost infinite adjustment so this is not a major problem.

I will post some pictures when I get a chance.
Andrew Bodge
'66 Elan S2 26/4869
I love the sound of a torque wrench in the morning. Sounds like... progress.

Andrew, thanks for adding the bits I missed, mcmaster.com is a fantastic site! where's any UK equivalent!?
Lining up the fully up and fully down positions was the most time consuming part, I used a small motorcycle batteryin the nose of the car. In the pics you can just about make out the felt pen arcs for up and down - even then, where these lines crossed was only a close approximation of where the rods connected. The thing that's stopping me using rod ends at the moment is the 'large' 13mm ball on the motor, I'd like to go 5mm/M5 (orM6) rod throttle linkage/motorbike gearlinkage size. I tried the R/C aircraft route but the ony ones they had were really tiny.

When I'm happy with the arrangement of rods etc I'll glass in the 'extra' holes I've made - leaving the original ones just in case (of what I'm not sure!)

SADLOTUS wrote:The thing that's stopping me using rod ends at the moment is the 'large' 13mm ball on the motor, I'd like to go 5mm/M5 (orM6) rod throttle linkage/motorbike gearlinkage size.

I punched out the original ball fittings and drilled the hole out to 1/4" for a bolt to go through the rod ends I purchased. (It has to be a countersunk for a flat-head bolt in order to clear the motor mounting bolts, on my setup.) Got to get those photos up...

I agree about mcmaster.com - even if you don't need to buy anything, it is very educational. Everything you ever needed to know about aluminum alloys, rod ends, and several thousand other subjects.
Andrew Bodge
'66 Elan S2 26/4869
I love the sound of a torque wrench in the morning. Sounds like... progress.

Here are some photos I took while fitting the motors. I've since painted the brackets satin black and should be refitting everything in the next day or two.

Pod in the up position, with the rod in tension. There is some &quot;give&quot; where the brackets mount to the body so it's not necessary to get the length just perfect. Pod in the down position. The rod is in compression and has a slight bend. Detail of the drive arm removed from the motor. I countersunk for the flat-head 1/4&quot; cap bolt.

tdafforn wrote:then why not use the radio control servos as well?
would be great fun in a car park!
What could be more endearing then an elan winking when a nice looking person/car goes past!
Cheers
Tim

CLOG Ian Phillips has this set up- each side can, and does, wink independently, together or in sequence!!!

Hello!! I read with a lot of attention your work! I have a Ginetta with popup light and i search a simple solution! So, sorry for my english, i'm french, nobody is perfect lol!

I search a wire. I saw yours: it's simple and easy to make i think.

I found another wiring, but... I'm not sure, because i'm very bad in electricty! I must to have your opinion and advertise!!

Can you help me??? I send you the wirong i found on web. 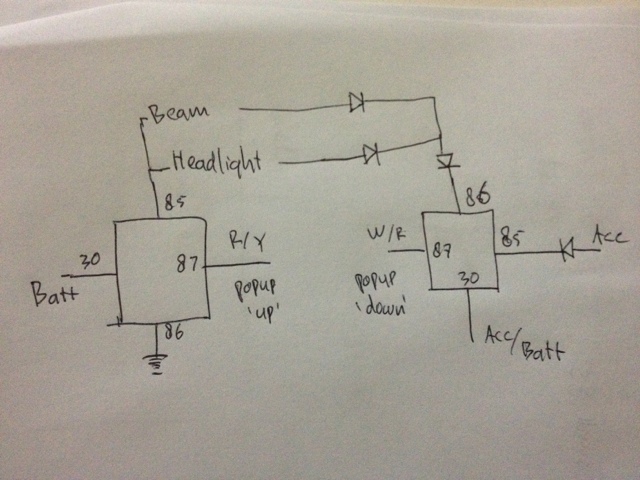