I've had all my bits checked out and it looks like my engine will be a lotus block with long stroke 711M crank. Using 125E rods with short comp height pistons. Before I get the block bored out for the new pistons, I know I need to get clearance for the crank counterweights to clear.

Ben,
Its been a couple of years since I did that mod but as far as I remember the amount of metal removed partly depends which 1500 block you use as there are 4 or 5 different blocks, ie. 2731,120E,122E,681F and the best 701M
Some will require more then others, I used a 120E, you have to remove metal from both the crank and the block, the big end caps are wider for the twin cam/Xflow then the 1500 so the cut out at the bottom of the bore has to be enlarged. Metal has to be removed from counter weights and the end of the block as I recall (memory loss!) Really its a case of fit the crank and see.
Brian.
Brian
64 S2 Roadster
72 Sprint FHC

I got my crank in and it looks like it only clashes with the bore on cylinder 2 as there is a high spot on the crank each side of the big end. Do you think I should grind them off or grind the bottom of the bores ? 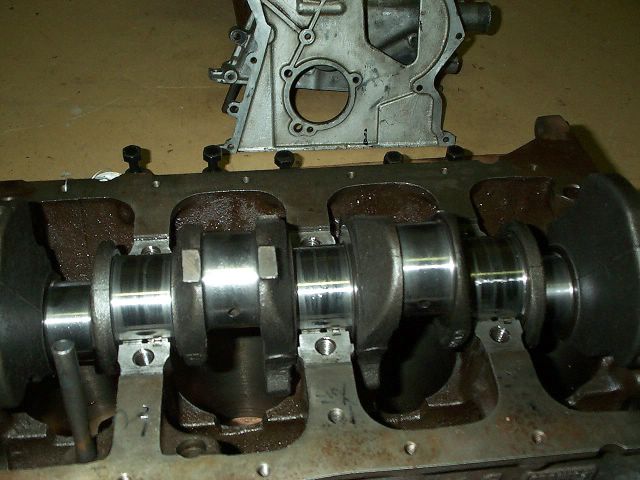 I haven't tried the conrods on, are they likely to hit too ?

I would try to take as little off the crank as possible as it will be harder to balance, If it does not weaken the block take off there, I had to take metal of the bottom off the bore to enable the conrods to rotate.
Brian.
Brian
64 S2 Roadster
72 Sprint FHC

Users browsing this forum: No registered users and 28 guests