I’m a new owner who has been making extensive use of the search function here trying to get ahead in the installation of new looms in my 71 project.
Long story short, I recently bought the car as an abandoned restoration. The chassis had already been replaced and running gear looks serviceable. With the car came new looms and the original instrumentation. I’ve been trying to make some headway with installing the looms but it is difficult.
I have no idea whether the looms are correct or not, some wiring fits sometimes with the wiring diagrams in the workshop manual, but other times it is very different. I understand that the wiring diagrams are not too reliable…

Anyway my specific queries at this point are-

I wondered if anyone could identify what loom I might have (who made it)? - it has one central fuse box rather than smaller fuse boxes and the cabin earths are all brought together in one lump that are then soldered together but then otherwise seems to have no specific earthing connection for the cabin (the engine bay has an earthing ring that connects to the front suspension upright bolt near the alternator, whilst the second separate loom for the rear light/fuel tank etc has another ring connection to join an earthing bolt to the chassis). Where is the earthing point for dash instruments in the cabin?

I have got the engine to turn over, and am now trying to get the tacho to work. The car has a new points distributor and new alternator (it came with an original generator). I have two wires that end near the coil (white and white/purple), which if any, should feed the tacho?

I have connected the blue exciter cable from the alternator to the yellow/brown wire that as far as I can tell should light the ignition warning light in the tacho, but on turning the engine over this does not work (the tacho was earthed).

I feel like I am playing with spaghetti in the cabin right now!

Thanks for any advice.
Ian

How many fuses in the fuse box? What does it look like? (Photos...)

A s130 had single in dash fuse box with four fuses and two connections for the coil to support a ballast resistor. The colors should be white/red and white/yellow.
'73 +2 130/5 RHD, now on the road and very slowly rolling though a "restoration"

Hmm...
My September '71 +2 S130 does not have the central dash fusebox. Just an ashtray.
It has the 3 under bonnet fuseboxes.
Coil with ballast resistor. 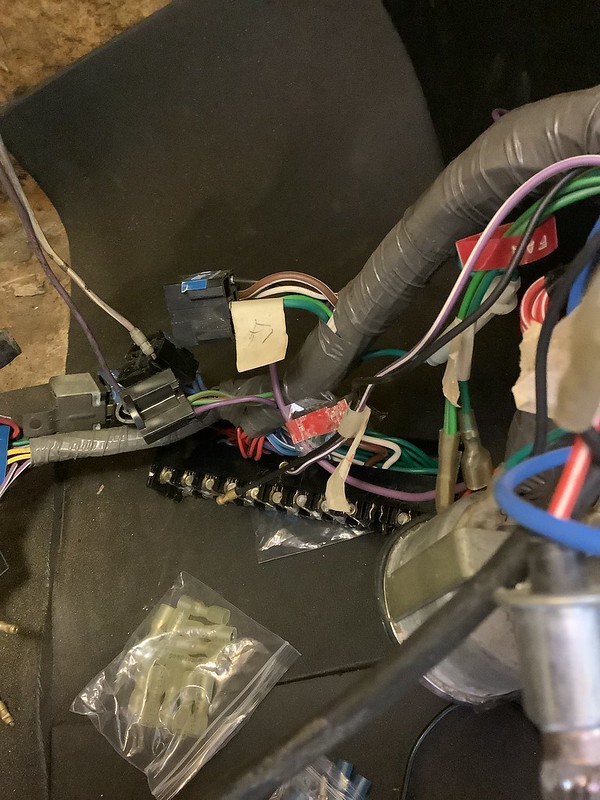 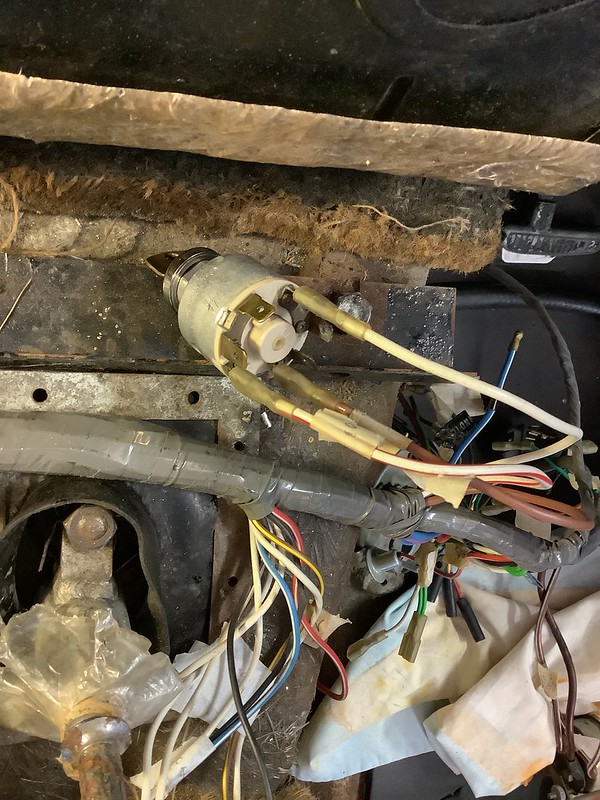 Current connections to the starter switch 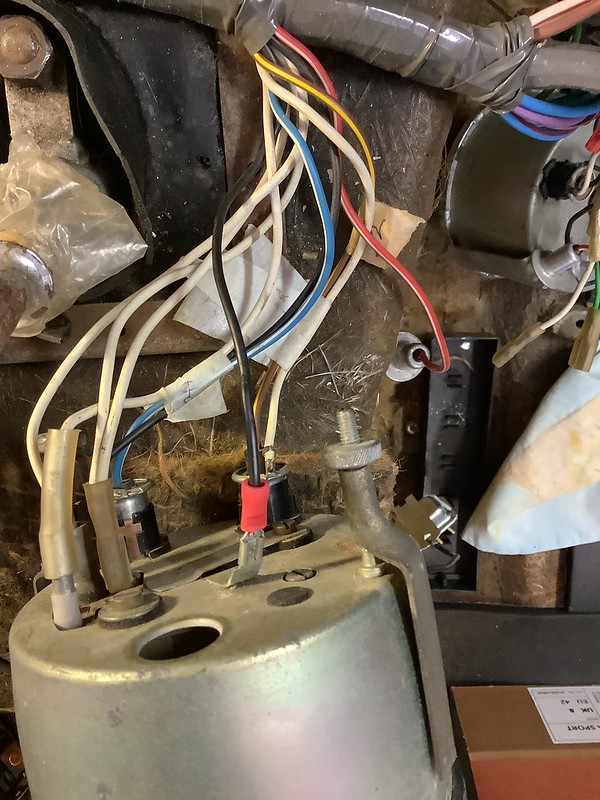 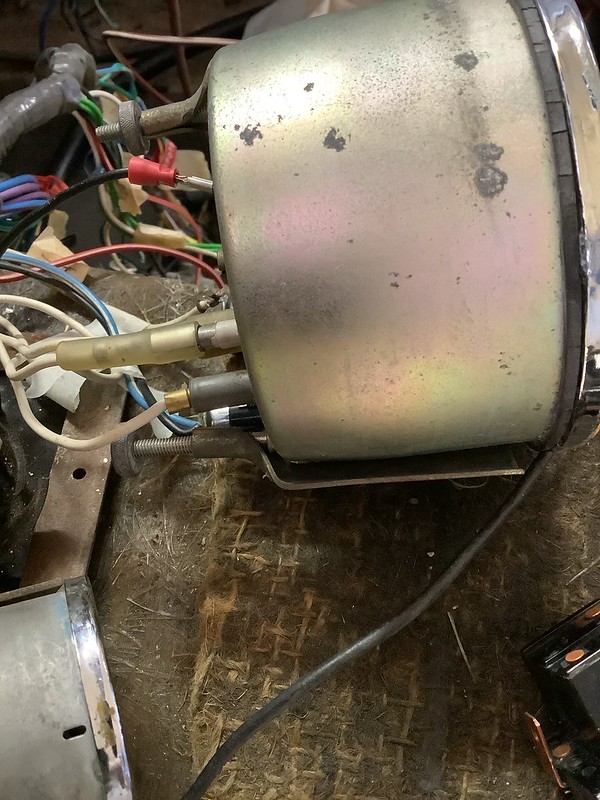 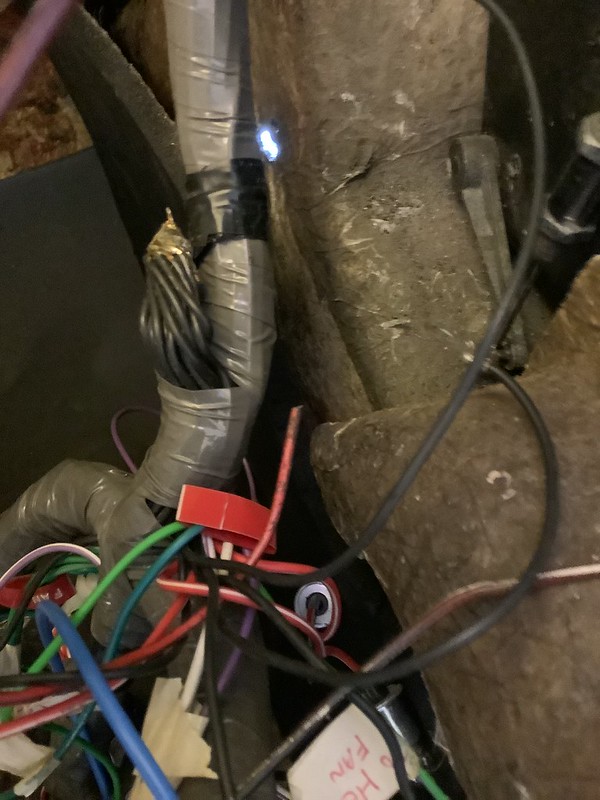 Kept blowing a fuse when in position no. 2 today, did have the ignition warning light coming on as expected last night but I fiddled with wiring and now it doesn’t again.

Anyone recognise the loom? Seems to also be suited to an alternator set up.
Car is 71 plus 2 SE.

Looks and sounds from your description like a real mess to me. Personally I would rip it all out and start again!

All the main suppliers, Kelvedon/SJS/Sue Miller etc. sell replacements looms but if it were me I would go direct to Autosparks who actually manufacturer these looms:-
https://www.autosparks.co.uk/finder/car ... %2B+2+s130

Well there was nothing installed when I got it and unhappily the PO did not seem to keep any records of what went where when removed nor kept the old loom.
Removing it would only help (maybe) if I know it is simply the wrong loom. Those I can find on the web do not have the single long fuse box nor that mass of soldered earths which does not look very professional to me.

On the auto sparks link, what’s the difference between the ‘main’ harness and the dash harness?

Car came with a generator in situ, but I bought the kelvedon alternator both as the loom suggested this and as a replacement for the generator. I have no idea about the fuse boxes as everything bar the. engine was removed from the car. There were some old fuse box holders in the spares,a control box too.

Spent another couple of hours trying to make sense of the loom. But it does not seem to fit any of the diagrams in the workshop manual. I undid everything I had done to start from the beginning-
I’m fairly confident of the following-
Battery to starter solenoid with alternator output feed.
Starter motor on opposite connection post
White/red from starter switch to front spade terminal
Feed to positive side of coil from opposing terminal
Starter solenoid earthed
Brown feed from starter(battery post) to starter switch
White cable to starter switch

I not sure which connections the cables go to on the starter. Clearly the white/red is only live on the start twist and not live in positions 1 or 2. So the engine spins but blows the fuse when the starter gets to position 2.

Worth getting the auto sparks loom and which parts?