Bluetooth instead of a radio

I have reveneered my dashboard with a blank in the radio space. My idea was to use bluetooth direct from my smartphone to drive the speakers. I have come across the attached device that looks like it will work and is not expensive. Has anyone done anything similar?

I haven't, but it's the likely route I will go. I use bluetooth audio off the phone via a dongle to the aux in on my daily. Also have a Bluetooth amp I use for music while working at home.
'73 +2 130/5 RHD, now on the road and very slowly rolling though a "restoration"

I use the smallest AM FM "head" with bluetooth. So the phone rings, and I can hear it. Also, we have some skookum local radio if the engine is not exciting enough!
Born, and brought home from the hospital (no seat belt (wtf)) in a baby!
Find out where the limits are, and start from there
Love your Mother
Earth

None in any of our Elans, but we do have it in our 60 Spilt green Kombi, its fitted under the back seat and works brilliantly, I was referred a car audio specialist who supplied the head unit, speakers an fitting. I'd recommend it, I use Spotify and iPhone to stream, he also fitted a car charging point for the phone for long trips.
Last edited by vstibbard on Sun Mar 28, 2021 8:22 am, edited 1 time in total.

I just have a radio blank as well. Actually this is how I received the car new at the factory in 1969.

Use this now: http://www.outofsightaudio.com/mark-i.html
Put in the boot (trunk).

Use my IPhone to control. Music library and SiriusXM. Admittedly, with a drophead and a loud exhaust don’t really listen to it much.

We have the same Out of Sight unit in our 60 Split Screen!

Very nifty! I've got a RetroSound radio, bluetooth when I want it or regular radio if it don't want to be faffing with my phone, but those devices look pretty cool too!
1969/70 Elan Plus 2 (not S) 50/2036
"It just wouldn't be a complete day if I didn't forget something!" -Me

I bought one of these:

But I haven't fitted it yet, because in my case I will need to take my bespoke dashboard out & do some surgery on it. 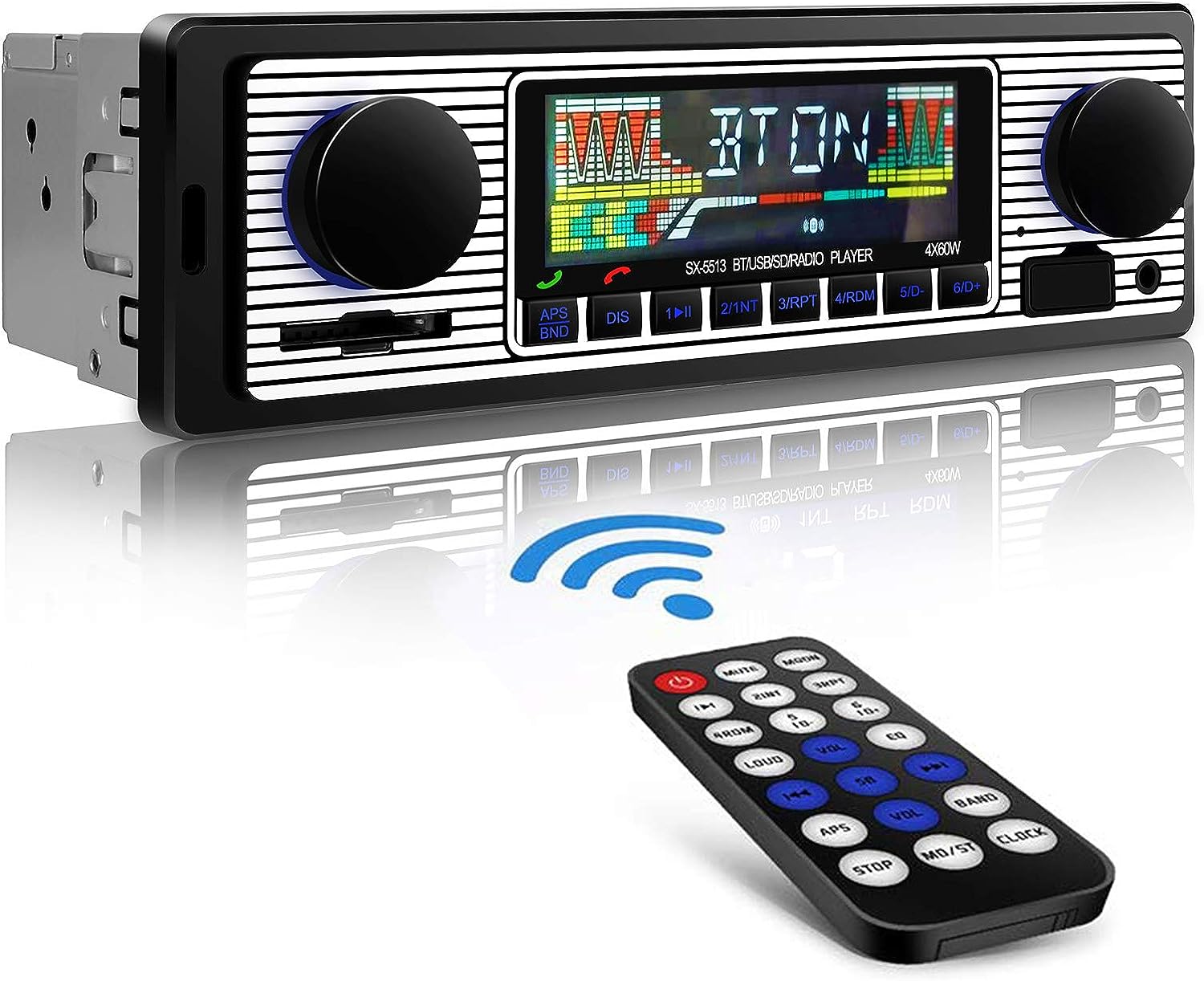 Similar to Billwill have a look at Ebay item 203316972521.
Astonishing value for money - retro(ish) look - takes up very little space behind the dash. I havent fitted into my +2 but have into one of my other classics. I have a (hidden) DAB adapter feeding the Aux in and an SD card with my favourite music on plus of course you've got the regular FM stations - all eventualities covered.
The only downsides are that there doesn't seem to be a way to control the volume when you switch on - it always comes on too loud and the electronic display jars a bit if you really want to keep a retro feel in your car.
Baggy

Baggy2 wrote: the electronic display jars a bit if you really want to keep a retro feel in your car.
Baggy

Though I ordered a coloured display, I think they have actually sent a monochrome one. I don't know for sure as I have not powered it up.

Anyway monochrome will be less of an anachronism.

Youngsters born since 2000, would probably think it came from the dark ages.
Bill Williams

Things have changed in the last decade . I built my own out of an iPod 12v amp hidden in the space behind the +2 rear armrest and used an old Motorola droid as a touch screen in the radio cutout.

Now you can hide it all in a tiny space, and need never pickup a soldering iron again.

But I never really used it... It is so noisy at 70mph I needed headphones anyway !

I just bought a modern DAB radio with Bluetooth and it slotted right in, bought a plug to connect to the unit and connected the speaker wires to that. Did need to fit a DAB suitable aerial and new cable to it, but as I was completely retiring the car this was not a problem. The modern radios without cassette or CD player are very small and there is no problem fitting them. I managed to find one in my local auto shop that had been superseded and got it at a bargain price, works a treat and has the benefit of not looking like I’ve got a disco light system in the car. I also fitted door speakers at the same time.
Change is inevitable, except from a vending machine!

Interesting discussion and as I started down the road I was amazed at how much money one could spend in this arena!
In the USA, Blaupunkt is selling its re-issue of the Bremen, which should really go in a later 70s car, but doesnt look too bad - unfortunately the DAB does us no good over here, but is $450+ when available via Crutchfield.
On the headless front, I think that this amplifier is a particularly good way to go if you don't want to put in a radio or want to put in a non-functioning radio it is from Kenwood the KAC-M1824BT.
On the speaker front if you are using the rear parcel shelf, while not cheap these speakers are really thin: the Morel Virtus Nano Carbon 62, once again not a cheap solution in the USA. I am guessing that they would also work in the footwell for a front/rear set up.

Back in the day, when I used my first Plus 2 as a daily driver, radios were getting stolen out of cars every day, so i left the factory one in the dash and installed a better unit in the glove box, still not a bad idea if you need the mod cons. It didnt always start every night, but nobody nicked the radio or damaged the car !!! it survived almost two years of regular stays in the car park at the British Rail station in Wolverhampton before I sold it when I moved to the States in '87.

After my research, I think that I am going to continue to listen to the engine and spend the money on new suspension parts (:
Nick Baxter
1970 Plus 2S (Federal)
1969 Plus 2 (UK) - sold

If you can live with the non-period looks of the control panel - I found a very neat solution - made by "Kicker" a small head unit and power amp.

On my (Sprint) the head unit fits neatly in the ash tray place - so no need to modify the fascia. I opted for a sound system only - either with USB or Bluetooth music from my phone (rather than phone - they may do that too.)

With some decent speakers fitted in the doors sound quality and volume is as good as good at up to 80mph - about as much as you can realistically expect ...and at a reasonable price (c. £500 plus instal)

Initially I was unsure about the aesthetics but I personally didn't like the "retromod" head unit looks either - and the practical the benefits quickly won me over, and easy to revert to the ashtray!