At long last I have saved up enough money to buy a brand new head for my 'wife', so I'm back. Details and questions will be in this topic.

The price made my eyes and other parts water,

because he normally makes heads for race cars and he told me that this is the only road going head that he has made for an individual customer for a long long time, if ever. Still, if it were not for the racing fraternity, it probably would not be possible to get a new Lotus twin-cam head at all.

Wow, I don't think I've ever seen anything like that before, it just looks so... well, "NEW" - there's no other description I can think of.

Out of curiosity, when you mention a raft of computer controlled machines, what was the manufacturing process and how long were you waiting ?

The valves in my old head, although they were new were slightly bigger than the standard Sprint style valves that Tim Cousins, prepares the seats for, so rather than mess about I asked that SAS Engineering get me a brand new set of valves to match the head.

UAB807F wrote:Wow, I don't think I've ever seen anything like that before, it just looks so... well, "NEW" - there's no other description I can think of.

Out of curiosity, when you mention a raft of computer controlled machines, what was the manufacturing process and how long were you waiting ?

You can see the CNC machines on the photos of their workshop on the SAS website above. 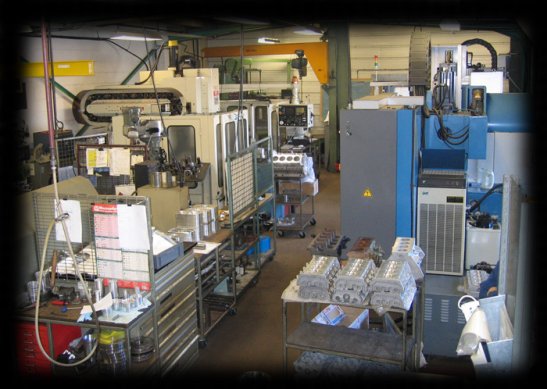 The blank castings are done with modern alloys, hence no need for cam bearing liners. THey are sand-cast by an Alloy foundry for SAS, using patterns and core patterns supplied by SAS. Interestingly Tim told me that founders prefer to cast the mould upside down compared to what they used to in the old days, so the 'original Lotus patterns' if any of them still actually existed, would not be optimum for today's castings.

The machines, as far as I can tell, are basically big computer controlled milling machines with beds as big as a metre square. I didn't actually see one in action. They have several there, each in its own safety cabinet. They have Japanese control system computers. Tim showed us that basically they may a 3D image on a computer and then give approximate indications of how the cutting should be done and the software works out the details, very impressive. I don't know how often they would have to reposition a blank on the bed to do a complete job.

The capabilities of those machines is awesome, Tim showed us a rectangular 'bell housing' that he was building to special order. It was being done by cutting it out of a large solid block of alloy, not a casting.

If they have not got any blank castings in stock then delivery would be around 8 to 10 weeks,
but in my case they had a blank so it was 4-5 weeks.
Last edited by billwill on Mon Sep 10, 2012 5:14 pm, edited 1 time in total.
Bill Williams

And now for my first question.

Have any of you purchased & used these flexible brake pipes. Are they good?

I wonder why the price is so different between different colours? Are they different quality?

Is there actually a difference in the flexible pipe configurations of the Elan S1-S4 as opposed to the Sprint?

billwill wrote: I wonder why the price is so different between different colours? Are they different quality?

The more expensive ones have stainless steel fittings rather than zinc coated.

Other candidates with SS fittings are HEL ones:

I would be interested in knowing what your bases were for choosing the SAS head rather than the QED head. The obvious difference between the two is that QED retain the shell bearings for the camshafts. Are the inlet and exhaust ports on the SAS head machined or as-cast? Just curious, not leading!
Russ Newton
Elan +2S (1971)
Elite S2 (1962)

I have used these guys in the past for various flexible hoses.

No association, I just found them very helpful and they are happy to give advice on the telephone.

Thanks for the details Bill, it probably sound daft but I quite like to see that we can still do some fancy engineering in this country. There must be a lot of cash invested in those machines but I think it's great that we have places around to do this sort of work. It's come a long way from the lathes in my metalwork classes at school !

I'd noted the comments about the cam bearings (or not). Even if it turns out they're needed, given the work in making the heads in the first place, it's not a big job to retrofit. It's interesting to see they cast with the patterns reversed to the OEM Lotus ones. I wonder if that means the more solid sections are uppermost and they can feed the top of the casting to control solidification and hence minimize any potential shrinkage cavities ? Whatever the reason I'd guess the modern castings could well be more uniform than the originals.

Brake lines - I just used normal Goodridge stainless ones, also bought off Ebay. I took the view it didn't make any difference what model (s2/3/4/sprint) they were for as the lengths would be similar and I've got a selection of banjo fittings with extensions I would use to get them on. Dimensionally they must all be pretty close at the rear as the calipers are the same, and I'd guess the main difference at the front is probably down to the caliper feed point (central or top), hence my collection of fittings.

I would be interested in knowing what your bases were for choosing the SAS head rather than the QED head. The obvious difference between the two is that QED retain the shell bearings for the camshafts. Are the inlet and exhaust ports on the SAS head machined or as-cast? Just curious, not leading!

I originally placed the order with QED, but for various reasons they had not been able to deliver, in the end I got fed up with the lack of supplied information as to what was happening and I cancelled the order with QED. QED have probably resolved their difficulties by now.

Tim Cousins has deliberately not done full CNC porting on this head, though he normally does it on race heads. In his opinion you get better low end torque for a road car without major port smoothing. The inlet ports have been tapered to match the 40 DCOE carbs. The outlet ports are as cast.
Bill Williams

On the question of cam bearing shells, I eventually decided that the makers must know what they are doing, I understand that most new cars with alloy heads run the cams direct in the metal.

The bearing surface should outlast me anyway, given my age, so if they do wear it will be up to the next owner to have the head line bored to take shells later on.
Bill Williams

Looks the business! I'm not sure that brass and ally mixes too well over the long term but has anyone here EVER had those plugs out?