Still smitten with my +2 after 11 months and 50 mile blat yesterday. Love it.

However the 9 year old Morgan Plus 4 Sport I bought 2 months ago is not for me , so going. After 65 odd cars owned to date I realise it’s either got to be a Lotus or Caterham for fun. Anything else doesn’t stack up in terms of handling and steering feel.

So Morgan will be going in a couple of weeks, therefore I will be looking for stable mate to the +2

So question is, how different are Elans to drive vs +2 ? I’ve never driven one as never been a person to waste sellers time unless willing to buy there and then.

Other option is to go Europa or possibly Caterham CSR260 to experience magic of their unique suspension. Had 3 caterham S3’s to date, so need a bit more width / luxury these days

200 kgs and that is big 700 kgs VS 900 kgs.
Both are good but very different.
+2 for comfort and imho better roadholding but large. Good for touring.
Elan lively delicate and more like a ballet. Could very easy get carried away with some naughty driving

Previously a 3-time Elan man, two DHC's and an FHC, I think it is the best handling, most fun sportscar I've ever driven. My current (modified suspension) '63 2 litre Alfa Giulia Ti Super Rep comes very close, and is more practical, I also had a Ginetta G4 which was just as much fun, but less practical, but nothing has yet beaten the Elan for sheer driving pleasure.
Since forsaking the Elan, I've had early 911's, Alfa Bertone Coupe's, and now have the Giulia saloon & Spider.
The '75 S2 Spider blew me away with how well it drives, although you have to get a structurally A1 car for that to happen. It's no Elan, but great for 5th gear cruising on long trips.
I tried a Banks Europa last year, but found it to be too noisy. Could be my age.
Unfortunately never driven a Plus 2, but I'd expect it to be almost as much fun as the baby Elan.
Just in the middle of selling one of my Alfa's, and am close to obtaining another Elan, watch this space......
If this one doesn't come off, I will try a Plus 2.
Current :- Elan S3 DHC SE S/S 1968,
1963 Alfa Giulia Ti Super Rep.
Previous :-
Elan S3 DHC SE SS 1968,
Elan S3 DHC S/E 1966
Elan S3 FHC Pre-Airflow 1966

Hi Dave,
Long time no speak, hope all is good with you.

Must be honest my favourite Lotus is the twin cam Europa, getting in an out is like the Exige, but worse. I I had to lean backwards as well due to the A post rake. Once inside a special place to be.... lovely.

Never driven a +2 so cant compare with my Sprint, but Alan's description above of the Sprint is accurate, even better with a bit more toque

On the positive side, you absolutely will not lose any money on a good car, in fact the opposite.

PS fitting a 5 speed box to my Sprint as I intend to do the Alps in it next year.

it's hard to put down in writing, but when you step from the Elan into the +2 it's like driving a slug, lots of noise and not going anywhere fast.... and when you step into an Elan after driving the +2 it feels like a rocket!

Another way to look at it - 126bhp in the Elan still feels exciting and relevant, but to get the same effect in the +2 you'd probably need 160+ bhp.

I enjoy them both!

Handling wise the difference is less marked but the lower weight of the elan is always going to feel more lively and chuckable. However with either model - the difference between a well sorted car, well aligned and all suspension in top condition, and a car that's worn or badly put together is night and day.

Club Lotus have a meet up in the Midlands near you don't they, maybe a friendly Elan owner might be persuaded to let you have a go ?

I have both, a S2 and a Plus2 130. The Elan is basically in standard configuration, only having the later tubular exhaust. The Plus 2 is 2L Zetec powered. The Elan is better in tight twisty bits, being much more lively and quicker handling. The Plus2 is perhaps a bit faster, however I have tamed it by installing the 3.54 diff. Yes, I have driven it with standard 3.77, and acceleration is slowed a little bit. It is also equipped with the close ratio gearbox. Having driven both on long distance tours, 500 plus miles each day, I would definitely choose the Plus2 over the Elan. But, when I decide to take a dash through the mountains on a weekday morning, the Elan wins hands down.
Rob Walker
26-4889
50-0315N
1964 Sabra GT
1964 Elva Mk4T Coupe (awaiting restoration)
1965 Ford Falcon Ranchero, 302,AOD,9",rack and pinion,disc,etc,etc,etc
1954 Nash Healey LeMans Coupe

Thanks for detailed responses guys, much appreciated.

Mark, did notice you nabbed a good priced 5 speed. Sounds sensible for touring.
1970 Elan Plus 2 S

To me, a +2 is more relevant and usable in any form 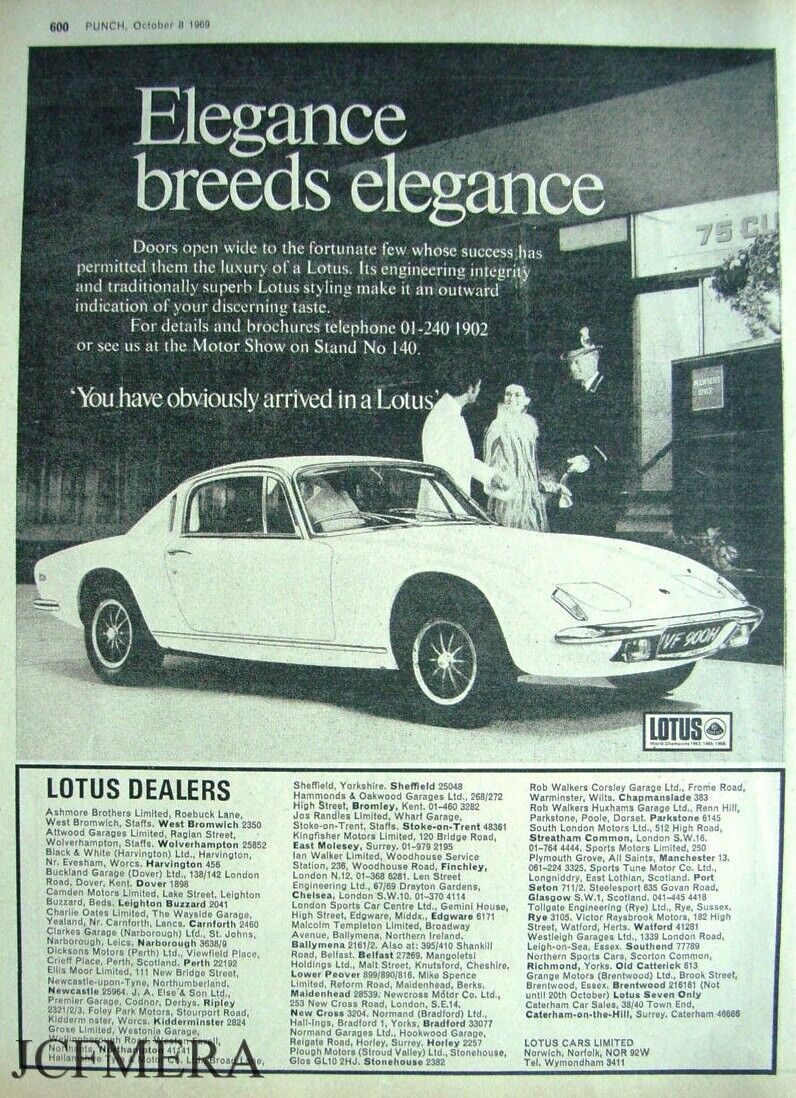 Perhaps when lockdown is fully over and we can meet again we should arrange a meet-up of Elans and +2’s in the UK and elsewhere. In the Uk we could arrange for Jim Estelle to bring along his wonderful original +2s130/5 as well as his original Elan Sprint, I could bring my converted cars. They are all fantastic, Elans and +2’s, but I do have a preference.
Kindest regards

Alan says "To me, a +2 is more relevant and usable in any form"

TBG wrote:Alan says "To me, a +2 is more relevant and usable in any form"

Spyder fan wrote:Perhaps when lockdown is fully over and we can meet again we should arrange a meet-up of Elans and +2’s in the UK and elsewhere. In the Uk we could arrange for Jim Estelle to bring along his wonderful original +2s130/5 as well as his original Elan Sprint, I could bring my converted cars. They are all fantastic, Elans and +2’s, but I do have a preference.

Is that Don’s brother?

I blame the helicopter pilots

"I blame the helicopter pilots"