Oddly enough, I never found the lock-rods a problem and have not made any notes about them.

If I were doing it now I think I would attach a thin wire/cord to the rear end of the rod and thread it through the fitting hole in the door, before putting the frame back in the door. That way I should be able to hold it in the right place (by tying the cord) or pull it up to the right place after inserting the frame and slip it onto its stud & fit the clip.

The bit that was always a problem for me was getting the lock off the door, One needs small arms and a ring spanner ( ? ) of the right size up inside the back end of the door to undo the screw bolts with a screwdriver from the outside.

I recall that when I last did one windows hawser (drivers side) I replaced those pesky small nuts with rivnuts, but they are not as secure I I really want them to be.

Mine are the upper type in this diagram. 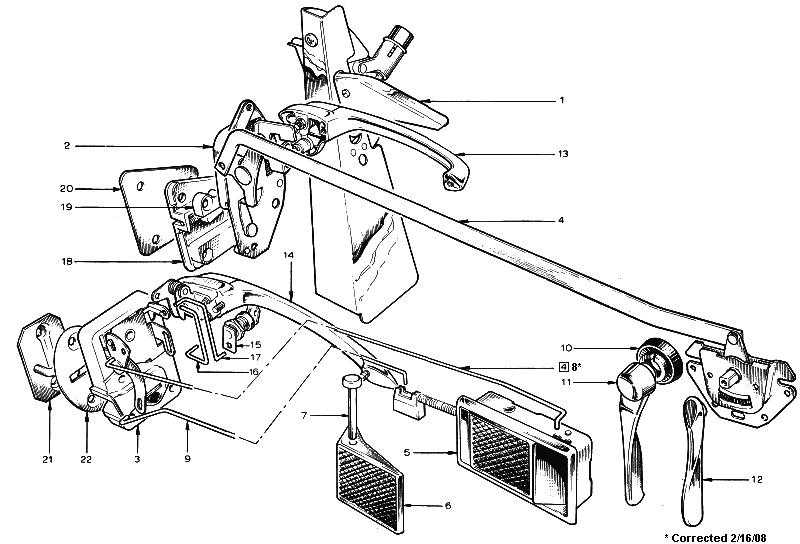 do modern lock rod retaining clips work, if one finesses the rod holder?
Born, and brought home from the hospital (no seat belt (wtf)) in a baby!
Find out where the limits are, and start from there
Love your Mother
Earth

Put Engine back into "Little Lo" .
Just bits to connect up and put Rad in.
Attach Prop and fill with coolant.
No panic and with new "Scissor Lift" much easier than before.
Alan
Alan.b Brittany 1972 elan sprint fhc Lagoon Blue 0460E

I have just been to collect my Sunday paper - roof off of course - minus 6c - and roads like glass with black ice. Great fun being a hooligan at very low speds!! D

& into storage she goes for another New York Winter: 1400 miles this season, probably the most since I acquired her 10 years ago, dare I say trouble free!

alan.barker wrote:Hi Phil
I hope she won't get pimples everywhere with that cover.
Alan

It's a Covercraft breathable cover... used it the last 10 years with no issues
Phil Harrison
1972 Elan Sprint 0260K

Good Phil,
I'm too chicken to put a cover on my Lotus and TVRs.
Just finished connecting everthing up after the Gearbox and Engine refresh.
My Sprint has done total of 81,754 miles now and never been rebored. I replaced the Pistons at 71,300 miles in 2005.
She needs refresh with paint as the last time painted was in 2000.
Have a nice Christmas
Alan
Alan.b Brittany 1972 elan sprint fhc Lagoon Blue 0460E

Hi, I'm removing the front Dellorto yet again, having decided that it's not an air leak in barrel 1, it's barrel 2 not flowing enough air on tickover. Well, I couldn't find a leak and have little to lose now... I'm hoping to find the idle channel is blocked, but don't hold out much hope really. It idles like a pig and I'm fed up with it, so after this I will need to try replacement carbs.

Finished another big job. I installed a complete new exhaust system, and while I was at it I repaired the 'tunnel' in the boot-floor under which the silencer lives, as it had a lot of cracks and holes and sags and the remains of past half-ass repairs. This aspect was what took the longest time, as the tunnel had so much damage that the best course of action was to cut out the portion between the seam and the rear end of the car, about 2/3 or more of the tunnel, and build back anew.

To do that, I traced the cross-section of the tunnel onto some cardboard, cut that to shape, made several more, then glued those to a piece of thinner cardboard to make a 'form.' I covered that with some plastic sheet to which the resin would not stick, then blocked that up into place and laid the new fibreglass over it. The new tunnel section was built about twice as thick as the original for strength and durability, figuring that it's better to add lightness elsewhere than here. I spent some time on getting the underside of the new section nice and smooth and pretty, but not too much, since it'll be under the car and obscured by the silencer. But I'm pleased with the result. I also removed the bumper and fixed some holes under it as well.

For installing the new exhaust system, I didn't have too much trouble but did have these issues:

-I'd read some post here a few years ago alleging that installing a tube header in a Plus 2 is fairly easy, especially if bolts are used instead of studs. I found it to be a pig of a job, requiring not only that the engine be dismounted and raised (expected that), but also pried HARD to the right side and even then I only BARELY got the header in without scraping off a bunch of the fresh thermal-coat on it. Only at that point did I realise that the existing notch in the frame wasn't sufficient to provide enough clearance. Not wanting to wrestle with the engine again, I snaked an un-framed hacksaw blade down there and had at it. Took a while, but I eventually got enough of a notch.

-I found that the new intermediate pipe was too short, needing the angled part at the front extended by about ten inches. Of course no shops in the USA stock 1-5/8" stuff, so the extension piece had to be ordered and then I had to weld it on. But with that done, the system assembled with clamps as it should (this is one reason for the system replacement; the previous system had the downpipe welded to the intermediate pipe and the intermediate was irretrievably stuck in the silencer).

With it all together the tailpipe sounds just like it did before, but everything else sounds better- no loud blats from leaks or rattles from loose, decrepit components. Went for a nice little fang around the nearby area for about 20 or 30 minutes and it was the best drive yet in this car. It's finally starting to feel polished and well-mannered like it should. Tunnel over silencer was in poor condition- best remedy is to remove an d reconstruct. New can looks the business. Out for a fang. Best drive yet!

The Sprint is finally back in the garage after sitting outside for 2 years under a cover.
The so called "waterproof" cover proved not to be when a huge thunderstorm came through, and I found 2 inches of water pooled in the seats.....
The only lasting effect of the sojourn outside is odd bits of rust in the engine bay.
And, as discovered today, a seized electric fan motor.
Once removed I couldn't actually see how you got into it. I was able to free it up with some oil, and twisting and turning, but wondered if anyone knew how they come apart.
It's a "Kenlowe", and whilst it has some screws on one end I couldn't see a seperation line in the middle.
I guess some perseverance, then some swearing, and finally some brute force would have provided an answer but I am curious.

Ralph.
P.S. I also fixed the ex Maserati clock I have on the dashboard !

Hi The Veg,
On the last +2S they had a Heat Shield fitted between the Silencer and Body.
You've done a fantastic job and a Heat Shield might be a good idea.
I think your Intermediate Pipe was short because it was for an Elan and not +2.
Alan
Alan.b Brittany 1972 elan sprint fhc Lagoon Blue 0460E