What Lotus Christmas Present Did YOU Get?

So lets see what Lotus Christmas prezzies we all got!

My wife got me a hand made tool roll - what a special lady. All made in leather, now I need some imperial snap ons to go in it. GHill wrote:My wife got me a hand made tool roll

Wow, that's gorgeous! Where can I get one of those?

You could say that the whole Elan experience has been my big gift to myself, since I bought the car this month and have as yet spent a few hundred dollars on parts. Less Lotus-specific but closer to the actual Chirstmas, I ran into a situation yesterday during my fettling in which I needed a spanner in a size that I didn't have. Today I went to the store instead of buying the one spanner, I bought a whole new 250-piece tool set and a new bag to put them in. It was a long-overdue upgrade, so Happy Christmas to me!

I received this huge (7 lb.) Lotus book from one of my good friends for Christmas. It should keep me occupied with Lotus reading material and photos for quite awhile! Mine was a completely unexpected Boxing Day gift from Club Elite, nine back issues of the newsletter that I didn't even realize I was missing! Many thanks to Allan Boyle and the other officers and contributors. Mine was somewhat more mundane - a new driver's door glass from Kelvedon Motors (who are not in Kelvedon) for my S4SE, which it has needed since only 1983 due to the severe gouge caused by previous owner not changing the felt seal when the steel backing rotted away and dropped inside the door! Funny what you'll live with on your own car compared with what you do for others. The cobbler and all that...

So looking forward to refitting the window lift cable. Also new, of course. A tip here is to replace the scrappy bits of hard rubber sheet glued on the frame by Lotus with rubber tap washers of a suitable diameter and to remove all the pulleys and clean the pins they run on. New 'e' rings as well of course. The softer bits of rubber or dense sponge used elsewhere on the frame seem to last much better for some reason.

Classic certificate of vehicle provenance from Lotus, cufflinks and a vintage cup and saucer ! GHill wrote:My wife got me a hand made tool roll

Wow, that's gorgeous! Where can I get one of those?

The wife got mine from Black Orchard Leather in the UK we've had a few things made from him a good guy and he has great skill!

Loving the crimbo presents y'all I also got Miles Wilkins' book on the Twin Cam engine a good read!

Got a breathable car cover and dehumidifier. Just too late to stop the first signs of micro blistering on the +2's boot

Given the recent weather, perhaps some shares in a company that makes dehumidifiers would have been better!
Ron '68 +2, '92 M100

I got a Stratocaster to match my Sprint. A Stratocaster to match my Sprint.

My son got me this:

Yes, my wife wanted a shirt with Electrolux, Hoover, and Frigidaire on it, but I thought people might think she was strange.
Jim

I got a lift in a nice orange VW Transporter van! 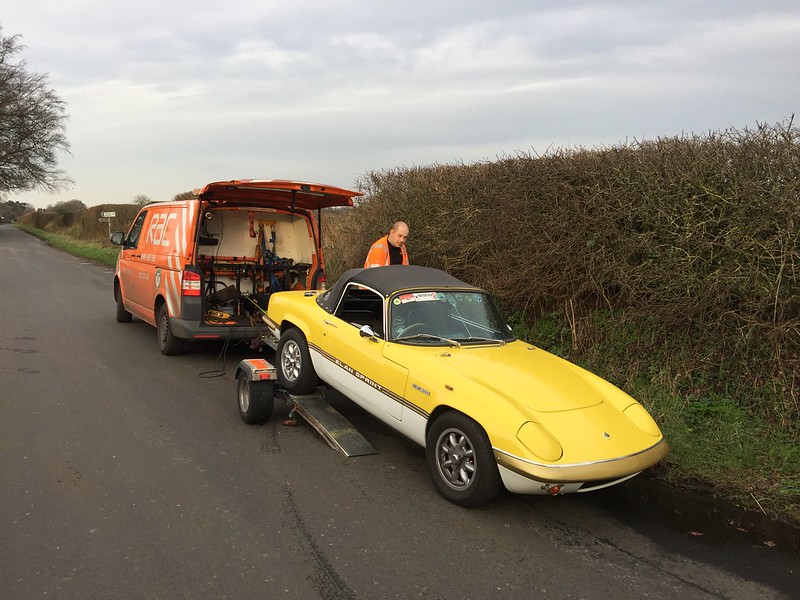 Floor mats for the Evora and the official Lotus driving coat.......