Almondgreen wrote:The trackday went surprisingly great ! It went like a dream, I took lot of pleasure driving it on the track and made more than 150 miles on the track. I just had 2 problems :
- The battery came off the brackets and bumped on the inner of the rear left wing, slightly damaging it
- I lost ALL the rear left wheel pegs ! Hopefully it happened just on the very last session, but I've had checked if the wheels were well tightened just after the lunch, and they were perfectly fitted. Don't know what could have happened ?

battery: mine is now lighter, with inner fender foam protection, and attached with a strap in addition to the brackets.
pegs: make sure the hubs are not greased (I had to clean up mine after a "pro" mechanics looked into the diff at some point), check that the pegs are of the proper late type, in place, and that the peg holes are not deformed. Adequate torque (200 lb/ft) should keep the wheel in place if not deformed, though I've found that track use calls for double checking (esp. after the first session - beware of the heat if brakes have been used generously...). The replacement pegs I've bought are not super tight compared to the stock ones, possibly held by rust... but I carry a couple spares and grip-pliers just in case. I try to pay attention to "toc-toc" noise coming from the rear, which is the wheel moving laterally when becoming undone and starting to push out the pegs.

The Veg wrote:Not to hijack the conversation, but for the edification of n00bs like me, how does one tell if the pegs are of the 'proper late type?'

early type has a flange that seat on the inner side of the hub, late type is cylindrical (so can be pushed in from the outside)

It may also be worthwhile to check that the spinner is not bottoming on the threads on the hub before it can fully clamp the wheel centre. Note the angle that the spinner turns through after being hand tightened to ensure that it is consistent for all wheels.

Nicolas, I was at magny Cours but didn't saw you. I talked to a nice person who owns a beautiful Yellow 26R "replica", shown in the pics below.. 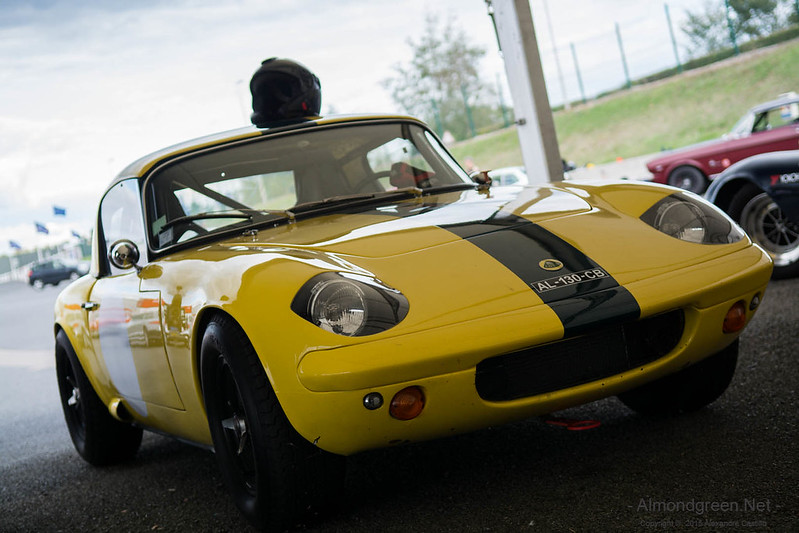 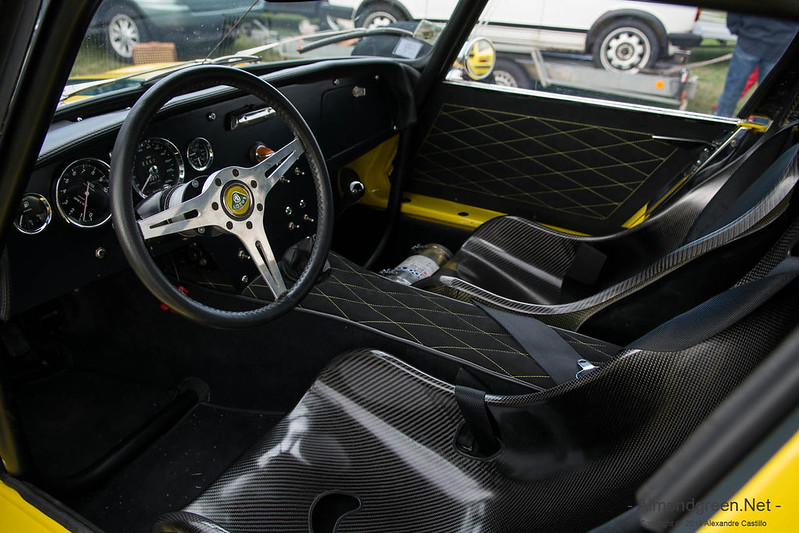 I finally paint my bumpers, to match the golden stripes, and it looks gorgeous !

yes, to my great dismay I could not make it... weather was wonderful it seems, too.

So you did meet with R?gis (yellow racing elan) from near Lyon: great chap, and he does know how to get his car going...

hopefully we'll meet next time around - let's keep in touch. 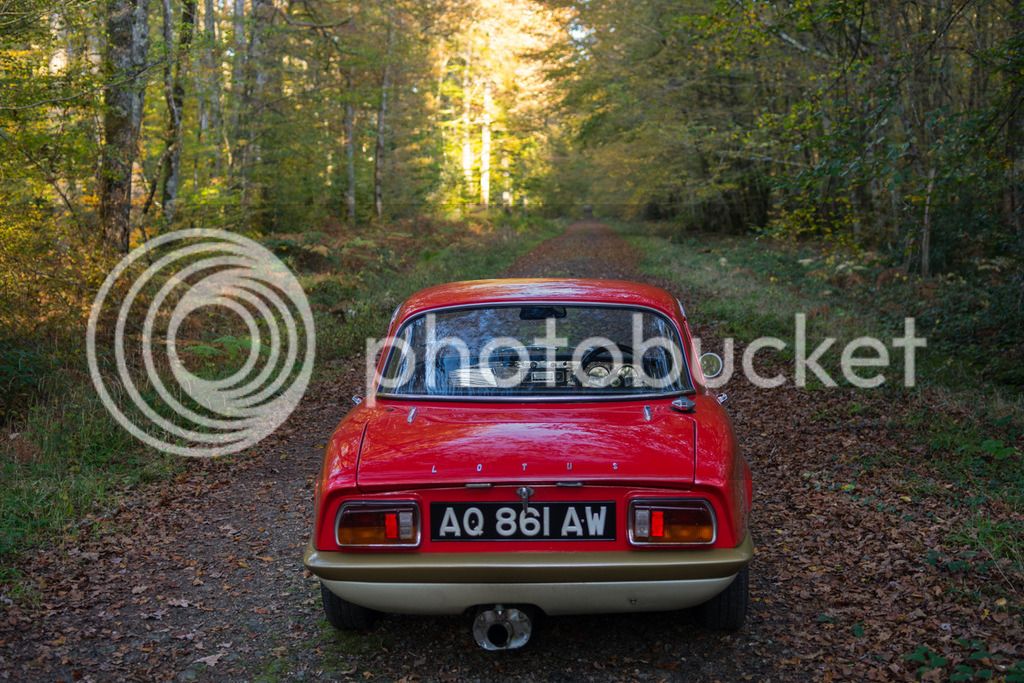 And my wife drove it, while I was in the Elise :

Did you receive the paperwork I sent you a month or two back?
Steve

Yes I received them, thanks again for everything !

nice photos ! I especially like the ones in the forest...

did not realize your steering wheel what somewhat unusual, fits the car rather well though, very seventyish : what is it ?
S4SE 36/8198

It's a rare Springalex, made in the UK, circa 1969. It was usually fitted on Triumph TR4/6 or Spitfire.

At first sight I found it quite ugly and I was thinking of replacing it, but the more I use it, the more I like it, and finally it's suit the car quite well..

And a few pics for wishing you an happy festive season ! 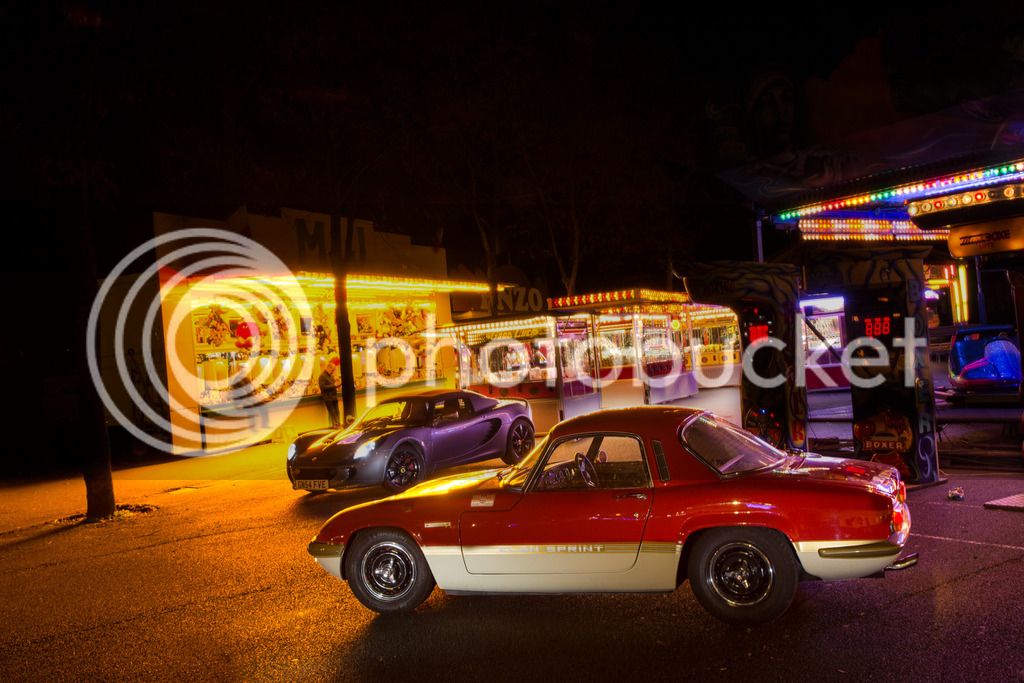