How I repaired my rusty front suspension turrets.

In early May, I found to my horror that I had not been keeping my drain holes clear and my front turrets had rusted to a thin shell that I could easily poke a screwdriver through.

NOTE: the turrets LOOKED OK until I poked, so try poking yours too. I set about repairing the turrets by making steel patches and having them welded on for me. For the full story, click this link:

This picture gives a one-shot summary 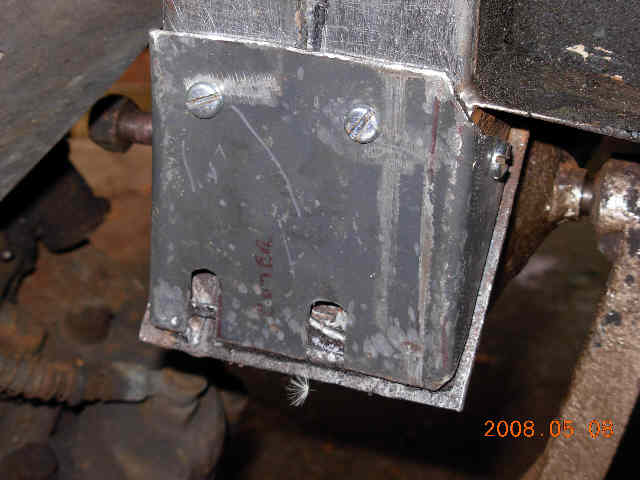 Good morning Bill
Whilst it looks like you made a good job of the repair, i think this chassis was calling TIME UP! After all, it doesnt owe you much 30 odd years on. And if you dont mind me saying, the front brake hoses look a little tired too.
All the best,
Leslie

Had there been any significant rust in any other place on the chassis I would have agreed with you, but at my age, tight for cash and with all the other things I want to do (like move out of London) I really didn't want to take on a task of replacing the whole chassis, which last time took around 6 months total.

I feel sure that this 'repair' is stronger than the original and certainly less likely to accumulate more crud & rain water and cause rust in the turrets again.

It should last longer than me now.

Note that it was important to weld this patch on BEFORE the turret broke or twisted, so that the chassis geometry was still OK. Had it broken or twisted, it would have been necessary to take the body off to be able to put a patch on and correct the geometry, which then of course would not be worth while; then it would make more sense to get a new chassis.
Bill Williams

Bill, hopefully you poured POR-15 or something similar down the turret to prolong the next 'breakthrough'. Get a brush with a long handle and slosh it around for good coverage. Do the outside, too.

Not sure what that stuff is, possibly a USA name.

I was liberal with some stuff called Jenolite which is one of these rust conversion liquids. Contains stuff like phosphoric acid.

Also the Hammerite is a paint designed for this kind of work, to deter rust.

Click the link between the photos in the root message above to see the full sequence of what I did.
Bill Williams

My favourite coating for the underside components is Waxoyl.

Bill,
I am glad to see what you have done. I have for a long time felt that the view that all chassis over 15 years old are scrap and need replacing is absurd. I have no idea how old mine is but I suspect it is more than that and it is perfect. I say this after very careful investigation. I would be happy to have it repaired if it needed it.
" If it was made by man it can be repaired by man".
Chris

What Chris said! (thumbs up).

chrishewett wrote:I have for a long time felt that the view that all chassis over 15 years old are scrap and need replacing is absurd.

My original chassis was replaced in '73 or '74 due to damage to the front crossmember. Admittedly, the car wasn't taken out in the wet much after that, but when we pulled the body off last year, the chassis had no corrosion. It had been coated with some black tarry stuff over the red primer. I had it chemically stripped, reinforced at critical spots, then painted it. Should be good for another 30 years.
Andrew Bodge
'66 Elan S2 26/4869
I love the sound of a torque wrench in the morning. Sounds like... progress.

I agree with Mark's calculations etc and say why not replace the frame after say 10 years or so. I think they do get tired and bend. I have been thro the sort it process also when I noticed the upright bobbins on my +2 had been pushed inwards and protruded quite a bit into the engine bay with a bit of fiberglass damage also. My inspection did not show any rust damage to the uprights but they were getting thin. I got round it by making good the fiberglass at the same time refitting the bobbins.I then made a brace which spanned between the two turret mounts and secured using a bit longer bolts. It was between the ears though and about a year later someone made me a daft offer which was taken up. It was a great car that +2 though. I owned it for best part of 5 years. Wish I still had it. Reg' Number was 1053K. Anyone seen/heard of it? I would have loved to keep the Reg' Number. What would that be worth now?

Driving thro my home town on day in my S130 I noticed a nice looking red +2 with the bonnet up.I stopped for a chat. Brand new owner was fitting new Vac pods for the headlamps.Had a wee look at the car and noticed Both the upright mounting were folded into the engine bay quite a bit. Bodywork was quite badly damaged. The cars camber on the front was way out. Visibly too much. There were dexion angle iron 'Braces' from the turret mounts (bolted), to the chassis x member/Vac tank, to which it was attached with selftapers. No wonder the headlams did not lift. What to do here? New owner was gushing with enthusiasm and well happy with his car. Do I tell him? (Car was dangerous and he was driving around with his wife and son in it.) I took the decision to tell him. He was gutted and very thankfull I had stopped and spotted the chassis was goosed. He had been driving on the motorway the day before at he said over 100 mph. Scarey!!
He did not keep the car long, about a week in fact. My doorbell went one night and in marched a couple of guys I knew who owned a Local car parts / acces' shop. They were looking for advice as they were thinking of buying 'a nice +2'. You guessed it.. Same car! I told them of its problems and sheepishly they admitted they had in fact bought the car. They sold it to a Sailor based in nearby Rosyth Naval base. Never mentioned the chassis problem and told the guy to come and see me for any help. What should I do here? Tell him or not? I told him and he sued the Guys for the price of a new chassis, which he fitted in his driveway one out one in. No refurbing at all...!! Resulting car was not very good.. But he did it in less than a week.

As Mark said. It is not difficult and gives a great chance for a refurb' during the process. Not a bad Idea after a few years running.

I'm well aware of what is involved in changing the chassis as I did this car back in 1978 when the front turret broke. But once you have the body off, there are so many other good things worth doing, that it gets expensive and takes time.

In '78 I took 6 months over it, replacing lots of bits etc. As I mentioned in respect of this chassis repair last year, I did not feel like doing a full change all over again again and fortunately I spotted the problem before a complete replace was the olnly solution.
Bill Williams