Apparently I need to pull the Weber carbs on my 1969 Elan +2 in order to access the fuel pump. My goal is to blow out the main fuel line that supplies the pump before attaching it to my new fuel tank. The old tank was weeping petrol and possibly allowing corroded material from the tank into the fuel system. I am looking for the easiest way to remove the Webers. The bottom 4 retaining nuts can not be seen, only felt. The idea of trying to reattach the spring washer combo and insert a feeler gauge in a hard to reach invisible spot intimidates me. Is there a YouTube video or some other advice regarding the easiest technique for pulling and reinstalling the carbs? Is there any other way to get to the fuel pump?

To access/remove the nuts coming in from the front and under carbs. A little tricky but only few minutes to get them off

I have the rubber mounts so haven't had to try set the during gap.
'73 +2 130/5 RHD, now on the road and very slowly rolling though a "restoration"

It's easier than it first appears. Once the air box and front carb is removed, access is much improved to the rear one. While you really don't need a feeler gauge to set the clearance on the Thackeray washers (you can get close enough visually on the gap), it's still doable.
Steve

A myth has somehow arisen about setting the gap for the o-rings between the carbs and the intakes on the head.

It really isn't critical (IMO) you just tighten the nuts until the o-rings are visually lightly compressed.. that's it.

I've never used feeler gauges or any measuring device for that gap.


~~~~
The bottom nuts of the rear carburettor are easily removed or tightened with a suitable sized socket head on a flexible screwdriver drive. 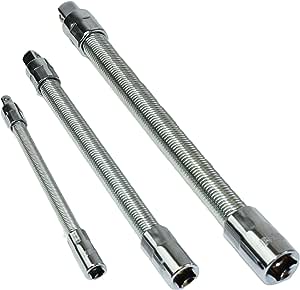 Hi
Easier than you think.

Remove outer air box
Slacken top nuts using open ended spanner
Slacken off lower nuts with 1/4" drive socket extension
when the nuts are slack there is more movement of carbs this allows hands in to remove lower nuts and washers without dropping them. beware there is a black hole between the chassis and body to loose them in.

Thanks guys. I am fearful of that black hole!

+1 to billwill's flex drive advice. I've used the 1/4" one for awhile and it seems made for carb nuts.

bitsobrits wrote:It's easier than it first appears. Once the air box and front carb is removed, access is much improved to the rear one. While you really don't need a feeler gauge to set the clearance on the Thackeray washers (you can get close enough visually on the gap), it's still doable.

I can set the clearances on the rubber type blindfolded.

If you can just get a fingernail in the gap, they are just right !

As an alternative a clever trick, that came from someone on here but I can't remember who, is to fully tighten the carburettor fixing nuts and then slacken them one turn to give the correct Thackery washer gap of 0.040 inches.