Fitting my Cylinder head - thinking ahead

I don't have any technical problem fitting the Head on my 69 Plus 2
What I would appreciate is help in making life easy for myself
I bought my car with the head off and all bits boxed .
Should I have the exhaust at the side of the block or fit it later ,it looks a tight fit
Should I fit the distributor before.
Would it be worth fitting the Webbers first ,seems a nice bench job
Any other parts .

Asking because of a lower back problem
Thank you John

Is the bottom end of the engine in the car and the front cover / water pump / cam chain all fitted so you are just putting on the head and connecting up the cam timing.

1. Putting the exhaust manifold in beside the engine first makes it easier as the exhaust side engine mount then does not need to be removed to fit the exhaust

2. The Dizzy can be easily fitted after the head is on

3. I would leave the carbs off to minimize the weight you have to hold and position and to also improve access for the fitting of the rubber drain tube as you lower the head into place. You may need an assistant or a hoist to lower the head if you have back problems as its a fair reach over the side of the car to fit the head on the block

Just to be pedantic, maybe do 2 above before 3 as you will have just a bit more room...

Serious note though, having had two discs removed and waiting for the third to go, I sympathise re the lower back. You will find it so much more comfortable if you can lift the whole car off the ground a good 300mm and put the wheels on blocks. I am very fortunate in that I have a two post lift that I can alter the working height - maybe you might consider a car lift (if you do not have one already) of some sort. Just a suggestion

Thanks Rohan
I will do as you advise.
RHC I am sorry to hear about your Discs .Mine is minor compared to yours its just a bulging disc but I have to be careful
Thanks John.

I have put the whole show assembled on in one piece but as an older guy no way I could do it alone. Its two fit people or do it with an engine crane.

Please remember 2 dowels made from head bolts to position head and head gasket.
I prefer to fit dissy after and carbs after. When timing chain has been tentioned. Then dissy fitted with engine turned to 10° before TDC. Points just opening and positioned nicely for plug leads.
Carbs then fitted using 1/4" drive and 1/2" socket on bottom nuts on carb flanges.
Have fun
Alan
Alan.b Brittany 1972 elan sprint fhc Lagoon Blue 0460E

The following topic of mine, which was actually about doing a Clay Test, has photos showing the refitting of the cylinder head of my Twin Cam. 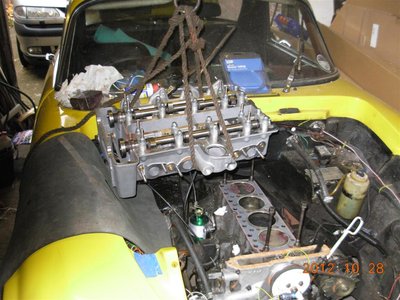 All great advice and why this site is so good and so valuable.

Back in the day, actually back in the Millennium, I would think nothing of yanking out a motor using whatever was to hand, using a nylon 'rope' pulley from Halfords (half a crown well spent

) and any kind of assembly to help fold, bend, spindle and mutilate as needed to remove/install the heavy lumpy bits, scraping knuckles and whacking various tender bits along the way.

These days, not so much - the brain hasn't obtained any more sense but the body now rules - refuses to allow us to do now what we did then. Hell, I even use gloves now just for turning the pages of a workshop manual.

All great advice and why this site is so good and so valuable.

Slowtus .. I agree this site is like asking your Dad .
.I took and replaced the block assembly from the Chassis with a rope around my neck .Now I realise why I have a back problem .

One sub question Brass or Steel nuts on the Exhaust manifold ?

Once again thanks all John.

john.houston wrote:I took and replaced the block assembly from the Chassis with a rope around my neck .Now I realise why I have a back problem .

Back in my youth I used to take the head off to reduce weight and wrap a rope around the block. Then by squatting on the the car legs astride the engine bay with one foot on top of each of the front fenders one could slowly stand up and just lift the block and rest it on the radiator support panel before lifting it down to the ground.

john.houston wrote:Slowtus .. I agree this site is like asking your Dad .
.I took and replaced the block assembly from the Chassis with a rope around my neck .Now I realise why I have a back problem .

One sub question Brass or Steel nuts on the Exhaust manifold ?

Once again thanks all John.

Just to bore a little more...

Early '70s I had two Mk1 Lotus Cortinas - one for me and one for the missus - really.

The previous owner was responsible for the black paint, what that photo shows is me returning it to the correct colours, the only photo I have of "mine" is the one with the missus and first offspring blocking the view!

Since I saw an accelerator pedal as a toggle switch - either on or off and nothing in between - i spent a lot of time fixing the various bits until one day I broke (broke, not burned out) the clutch on mine but continued to drive it to work and back for a week, resulting in the syncros being gently shredded.

One wintry Sunday I drove to the brother in laws place where the black one was store and he rigged up a mini gantry by whacking a few nails into bits of wood and I set about removing the drivetrain from my LC (the black drivetrain was already out of the car.

The engine in the white car was in great shape, the black not so much so I split both drivetrains, swapped the black gearbox with the white, non broken clutch plate included, stitched it together, back in the white car and drove home to supper that same day.

And there literally was snow on the ground when I did the deed using the Halfords hoist previously mentioned.

PS, how do centre a clutch without the proper tool?
You place the engine on its nose, insert gearbox and line up the holes, then carefully lift the gearbox straight up, tighten clutch assembly in place and go from there.