This is a sub thread extracted from the Malvern Piccies thread in "Free Parking" area
free-parking-f19/malvern-piccies-put-the-kettle-and-six-missed-out-t20325.html

A photo from Malvern by John Clegg. It ia actually SpyderFan's car.

BILLWILL:
I fancy one of those coolant header tanks shown in the last photo (with the Zetec).

Though looking at it I'm puzzled as to why the pipe to the engine is high on the header tank, I would have expected it to be low.

D J PELLY:
I expect that the Tank will have another Hose attached to the bottom of it & feeding into the Water Pump inlet side in the short (closed Thermostat) Cooling System.
The upper, visible Hose vents to the Filler Cap on the extended Thermostat Housing; that's assuming that the Cap on the Tank itself does not vent to Atmosphere.
A bit of a Bodge because ideally the Tank Cap should vent & make that upper Hose redundant.
Errrm! The Coolant Rail solution, that pretty Aluminium Casting running along the side of the Cylinder head, is a bit of a Bodge when working with a Thermostat.
A subject that has been discussed in depth in earlier Posts.

BILLWILL:
Anybody know what car that coolant header tank comes from, (or part number)?

I have one on my Caterham the same as that, it comes from the MGF or an Elise as far as I am aware.

SPYDERFAN:
John Pelly,
Shame on you for calling my cooling system a bodge! Works fine and doesn't ever break a sweat in traffic even when the outside temperature goes above 35 degrees C. I didn't see many other cars with their bonnets open, perhaps they were suffering from Zetec envy!

my posting was a bit of a generalisation & as I understand it that cooling rail works OK with the +2
cooling system but presents big problems on the Elan system (thermoshocks, see earlier posts on the subject)
The Rail was actually developed for racing Caterhams & when I spoke to the Manufacturer he would not accept its shortcomings, claiming that the heat from the exhaust manifold helped open the Thermostat

On the Elan once the Thermostat is fully open & the large cooling system coolant is up to temperature everything is OK it's the time in between that gives the Elan problems.
When I spoke to Spyder about the cooling rail they told me that it works on the +2.
I wonder how they'll do it on your Elan if it gets a Zetec transplant?

So that's your Car then?
Was my previous explanation of the upper Hose & there being also a lower Hose correct?
And does the Cap on the expansion Tank seal to Atmosphere?
Out of interest have you ever noticed fluctuations on the Coolant Temperature Gauge; especially during the warm up period?

Phew, I hope I've got myself out of that sticky mess

John,
You are forgiven ( I wasn't upset anyway

) the water rail is is a 'work around solution', which is a nicer way of putting it than 'bodge', but basically means the same thing. The temperature gauge inside the car has to be ignored until the thermostat opens, although it gave me a scare the first time I drove the car away as I thought the thermostat was sticking, it basically gives a false reading as the sender unit to the gauge is on the closed side of the thermostat, so therefore on the initial warm up phase you get a 95 degree reading before it rapidly drops back to 70 where it stays until you get stuck in traffic, I have the fan set to cut in at 80 and release at 75 which results in a normal cut in cut out that you experience on an everyday modern car. Yes there is a bottom pipe on the expansion tank and the cap is closed to atmosphere, I must admit I don't fully understand how it all works.... it just does!

BILLWILL:
>Yes there is a bottom pipe on the expansion tank and the cap is closed to atmosphere,
>I must admit I don't fully understand how it all works.... it just does!


You don't seen to have anywhere to vent if the water does boil. Maybe you should remove that top thin hose; fit a whistle on the thermostat housing outlet and block off the top inlet to the header tank.

On the other hand: To arrange that any air bubbles transfer from the head to the header tank, replace the pressure cap of the thermostat housing with a blanking cap so that bubbles can transfer along the top hose and fit a pressure relief valve elsewhere

DJ PELLY:
What is pictured is a Header Tank, not an expansion Tank.
The lower Hose from it keeps the Cooling System topped up with Coolant.
The upper Hose is attached to the highest point in the Cooling System to permit any Gases there to escape via the Radiator Cap, which here is situated on top of the Thermostat housing extension; it is connected to the top of the Header Tank to provide pressure equalisation within the System.

I'll build the comments into a new thread in the Things In Common area.
Bill Williams

That is a pressurized Expansion Tank, not just a Header tank.

After posting one of the comments above I thought? It cannot be that all expansion tanks don't have an emergency pressure relief, so I went out & checked my Espace & sure enough the expansion tank cap has a mechanism inside which is almost certainly a safety pressure release.

In the photo we can see that the cap on top of SpyderFan's thermostat housing is a standard type as used on the radiator normally, so it presumably has the 9...15psi spring valve which only opens when the coolant is under pressure, together with the much lighter pressure reverse valve for sucking coolant back. We can also see that the cap on the plastic expansion tank is the standard type (similar to my Espace) with a built in relief valve. So SypderFan's cooling system is safe against excess pressure.

However in my opinion: the pressure portion of SpyderFan's cap on the thermostat housing can never open because the upper thin pipe is feeding the same pressure to it from both sides, so any air bubbles in the thermostat housing cannot be dispersed to the header tank that way. Nor can they escape from this cap as the top portion of these radiator caps are sealed with a rubber ring to the housing [Under normal circumstances in the original Elan design, this allows it to make a partial vacuum in there to suck the coolant back from the unpressurised overflow bottle]

Rob Morley told me when I got a similar thermostat housing for my twin cam that if I fitted a pressurized header tank (expansion tank) I would need to put a 'blank cap' on the thermostat housing. I've tried to locate one, but the one I bought at Burton turned out to be a standard pressure cap of 15 psi.

It would probably be fairly easy to make a blank cap from an old radiator cap by removing the pressure valves & spring & then welding up or putting a bolt&sealing washer on any resulting hole in the top centre of the cap.
Bill Williams

And here is my poor 'grounded' Elan's engine compartment showing that I have the same thermostat housing now, but I have TWO 'radiator' caps and two unpressurised overflow bottles, but no "header tank' (Expansion tank). 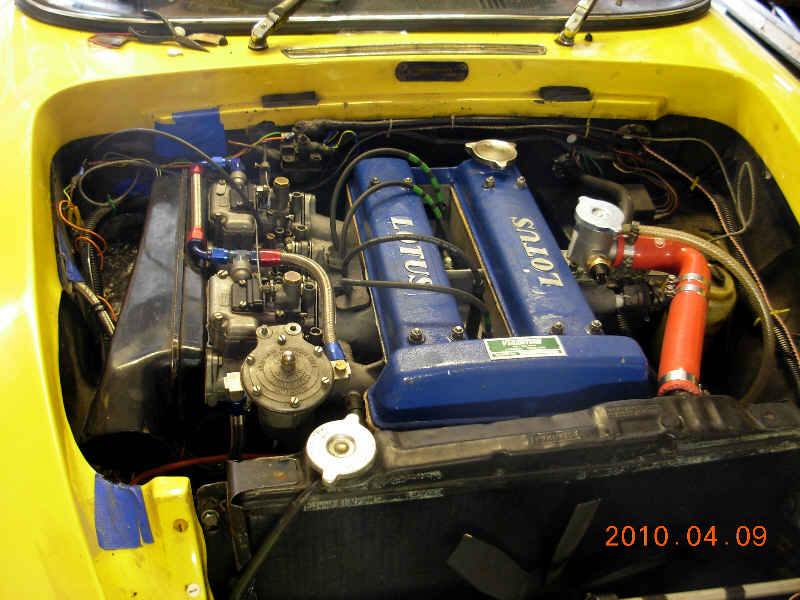 PS: Something that might be of interest is that although I thought and most other people thought, that the cap on the thermostat housing just 'must' be higher than the cap on the radiator. If you take off both caps and fill with coolant the level in both filling points is almost exactly the same.

However when using the thermostat cap it definitely feels easier to ensure that the water system is full of coolant even the main top radiator pipe.
Bill Williams

I'm fairly certain that when I did this mod to Locorts and an Escort some thirty years ago,
that it went something like this:

I seem to recall the blank cap was a Quinton Hazell product, not homemade,
and I don't recall the need to top up the system periodically.

sgbooth wrote:I seem to recall the blank cap was a Quinton Hazell product, not homemade,
and I don't recall the need to top up the system periodically.Regards,Stuart.

I have this system on both my Elans, the pressurized expansion tank is from the BMC 1100/1300 range and is metal not plastic, no need to modify a pressure cap as the non pressurized cap is freely available.....here are some on ebay:
http://cgi.ebay.co.uk/ws/eBayISAPI.dll? ... ink:top:en

mariodschy wrote:Clive currently doesn't offer his modified thermostat housing, does someone know an alternate supplyer or a similar solution?

See my standard Ford one in the third message above (yellow car) . But you do need a new top hose arrangement with a bend in it.

I think I got the thermostat housing from Q.E.D or from Burtons.
Bill Williams