I'm trying to avoid taking the rev counter apart but apparently have the bullet connector stuck in the socket. It looks like the bullet receptacle is part of the pulse sensor. Anybody had this issue or suggest a solution? 
The circuit is such that, inside, a wire goes from that connector, winds only a few times around a small transformer core as the primary and then go to the opposite bullet connector. It is done with opposit gender connectors so that you can pull out both white wires and plug them into each other to complete the ignition circuit to allow the car to run without the rev-counter.


Earlier versions used a U shaped thin iron strip as the transformer core, with half the 'core' outside the can and the primary was wound around the outside portion of the core. Like this one: 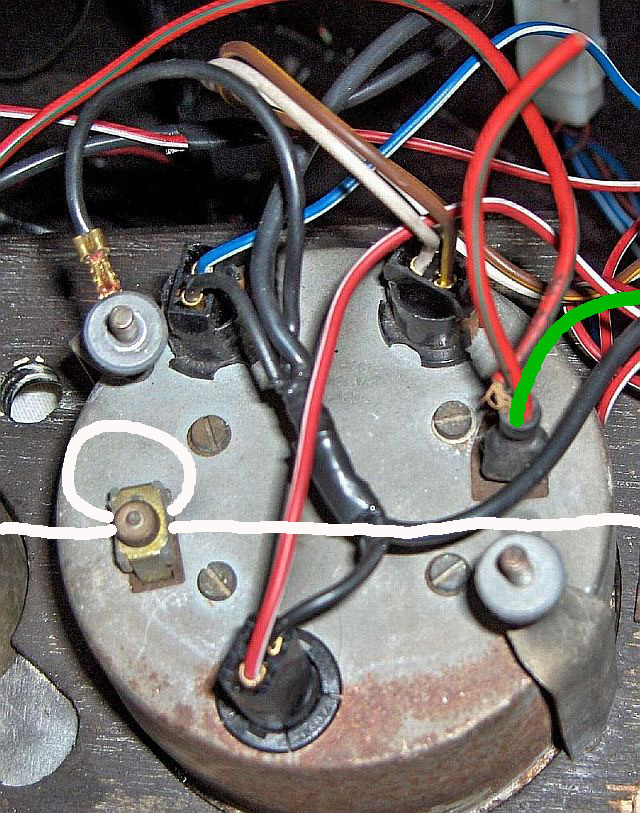 Take care on the back of the rev counter you should have a female bullet and also a male bullet.
They should not be both female

Thanks BillWill and Alan. I had thought about a drill bit but feared doing more damage. I'll give it a try. The female plug came right off.
Tom

Tom - the stub of wire still attached to the connector looks quite clean. It could be soldered onto a new wire and if well inuslated should last forever.

I only suggest this in case you should break the board the connector sits on. I cannot see it being a readily available part. If you do resort to this though, first, check continuity between the wire stub and the actual connector is good.
Hal Adams

Too late. I've pulled on it quite a bit since I took the picture and have lost about 1/2 of the strands. Tom

Not a problem - could you clean up a bit of the connector body to solder a wire onto?
Hal Adams

HCA wrote:Not a problem - could you clean up a bit of the connector body to solder a wire onto?

Can't do it. The bullet connectors are inside a rubber shield which fastens somehow inside the tach. I'm pretty resolved to send it out for repair but may try drilling first.
Tom

I'm confident you should be able to proceed with the drilling, just do it upside down so that metallic schrapnels won't get too much into the gauge. Then you can use a small nail, also reversed head inside the hole, then to the side to pull the remains of the bullet out. Good luck !
S4SE 36/8198

I posted this pair of pics a short time ago, shows inside loop. Thanks Craven, the pictures are very helpful.
Tom

If that problem was presented to me, I would select a self tapping screw of the appropriate size, and screw it in just far enough, leaving plenty on the outside to grip with a pair of pliers, and pull ! Out it should pop. If it doesn't, you did not use a large enough screw to grip the bullet.

After a couple of days of messing around and hashing over ideas from this forum and also a local one, I finally got the bl**dy thing out. Thanks to photo above those to connectors are on either end of an induction loop (1 coil) so easy to make if I screwed it up. Armed with that knowledge I took the smallest drill I had that was just big enough not to fall to the bottom of the connector and made one pass on the drill press. That took out the slightest bit of brass so I repeated the drilling again 3 more times with successively bigger bits, and tugged on the connector each time. The last pass I made allowed the bullet to come right out. As you can see in the photo below, There was no corrosion. It would appear that it was the design of the aftermarket connector that held it in.