Any good tips on the rad fan switch?

Been struggling with my radiator fan switch and wondering if anyone else has found a clever solution.

I have the old one with the expansion bellows that are supposed to turn the fan on and off, and which in theory is adjustable via a small screw hole at the back (see pic below).

Problem is if I adjust it to come on at 85 deg C, it then doesn't turn off again until about 30 deg C (i.e. in reality not until after I am back home, parked and ignition off). If I adjust it the other way - to turn off at say 80 deg C, it won't turn on until (at least not at the temperatures I am prepared to risk trying).

The brass collar is split, but I have tied this with a length of wire and it holds as tight as it did before. Wondering if either someone has tips to adjust it to get it working again (the manual speaks of an air gap adjustment screw, but warns you never to touch it) or a way to hide a discrete switch somewhere else that can take its place.

I know I could bypass it to a hidden switch under the dashboard, but I'd rather not. It is possible to take this switch apart if you feel confident. if the brass flange is relieved out a bit the back of the switch will come away exposing the contacts. be careful as you withdraw the back section, and check for any wires etc that may be clinging on. There may be nothing but I just can't remember.

Once the contacts are exposed they could be cleaned up with solvent, such as meths. If (as is likely) they are pitted and corroded, something can still be done. I used emery paper to get down to a shiny surface, then applied a strong flux, then flowed a layer of solder over the contacts to give a new surface. This is not as good as the original, but should give a few more years of life. if you are not confident about this, perhaps you know someone locally who could help....

Once the contacts are sorted check if there is anything else that looks wrong. You could try the switch out in hot water with a thermometer and check the operating points, Don't be afraid to adjust things if necessary.

When i did my switch, I applied araldite on the switch body then lightly clamped the two halves of the switch together. The excess araldite was wiped away and when set the switch was done. That was some years ago and it still works.

That seems a strange place to put a rad fan switch? Is that a standard fit at any time? Mine had an "otter" type switch opposite the top hose inlet? I had a boss soldered into the bottom tank later on as that seemed to make much more sense than one in the top tank!

The switch shown is the original switch fitted to the car.These switches became unobtainable many years ago and the Otter switch is a replacement.

With the Otter switch I believe you have to drill a precise hole in the rad to fit it, then press the switch in on its special grommet. Then you have to find a way to blank off the original tapped hole, You could leave the old switch in of course.

Thanks for the tips Dave - I'll see if a bit of a refurb will sort it.

Fitting an otter switch did seem a bit of a hassle, so hoping to avoid that. I had wondered if there is a modern probe-like sensor or switch that could be slipped inside a hose, or something I could surface mount on the rad/fins to avoid cutting holes should the original switch prove unfixable.

google kenlowe fan switch.
The adjuster might not be to everyones taste though. The capillary part fits in the top hose with a piece of foam to help seal. They've been around since the 1970s I think.
1968 Elan plus 2 - project
2007 Elise S2 [modified with a Hethel 70th sticker (yellow)]
2000 Elise S1 - Sold

I had a similar problem with a failed switch and after a little research fitted a Kenlowe Fan Control which just slips into the top hose connection. They do do another version that fits directly into the radiator cooling fins but I was worried about the possible damage to the core so did not go down that route.

This is a link where you can buy the unit but you can also buy direct from Kenlowe.

No associations with any of the above just a satisfied customer. Has been working with no issues for over a year now and being easily adjustable you can set it exactly how you want. FWIW I have mine wired through a relay and also have an overide switch on the dash if I need it.

Is that screwed into a boss on the radiator?

If so one of the modern fixed temperature fan switches might be the same thread. 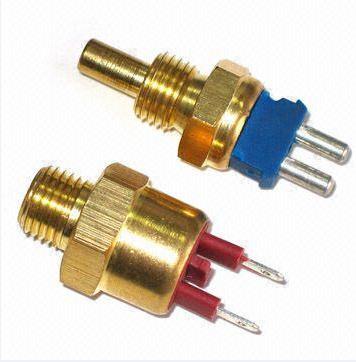 Thanks all - I'll start by trying to fix the switch, if that fails check the thread to try a replacement, and if none of that works our, give up and spend ?50 on the Kenlowe one. That looks to be pretty much what I had in mind, though if it has been around since the 70s, it admittedly isn't all that modern. I'm sure I can find somewhere to put the controller out of sight.

You can also get a thermostat in a housing that fits in the middle of the top hose. You cut the hose in two and fit it in the middle. Avoids the 'Kenlowe drip' ..

I used to have an Otter switch in the radiator and was amazed it never fell out or even leaked. I has a Scimitar with the same setup but it had a fancy metal bracket to hold the Otter switch in.
Carl

pereirac wrote:You can also get a thermostat in a housing that fits in the middle of the top hose. You cut the hose in two and fit it in the middle. Avoids the 'Kenlowe drip' ..

I used to have an Otter switch in the radiator and was amazed it never fell out or even leaked. I has a Scimitar with the same setup but it had a fancy metal bracket to hold the Otter switch in.

I've used the 'Panel lights' switch (S4 dash) to switch an electric fan on independently. The panel lights supply is then wired so that they illuminate any time the lights are on.

A possible disadvantage is that the panel lights can't be switched off when the lights are on, but I've never needed this function!

I have a defunct otter switch I have fabricated a bracket to hold it in and control the fan now from a probe that slides between the radiator fins and is fully adjustable ( and accurate!).
I'd love to have an old thermostat like yours. I think you should keep it exactly as it is, just disconnect it somewhere down the loom ( at the fan) so it's not doing anything and get an auxiliary probe of one persuasion or another to do the work.
Graeme
S4 SE
S2 GTS
Peterson JPS Exige

That's exactly what I have done. I left the original in place & have had the Kenlow sensor in the top hose & mounted the controller on the side of the engine bay just behind the rad. I have had this for many years now. I just got a new rubber seal for the capillary tube to sit in in the top hose & have not had any problems with leaking. Never had any before the rebuild either.
Keith Marshall
69 S4 SE DHC RHD Original owner