Yep.. just got to find a strong enough set of Jubilee clips.

Or one big one!

It's better with 3 smaller ones, because you then get 3 localised compression places.

It is also easier to fit the doughnuts to the shafts on the Bench instead of under the car. 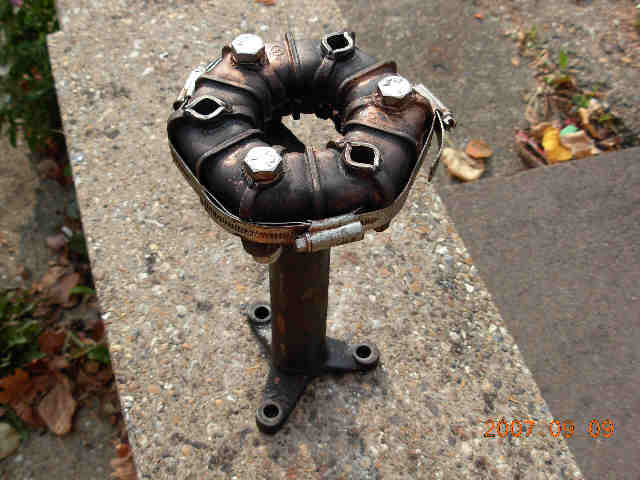 I've inspected the doughnuts and they have surface cracks, very small, plus some evidence of stretching round the bolt holes. I have some good used replacements, I will probably fit them for now. My diff has the strengthening plate fitted across the ears. (looks like a simple bit of angle iron... really, Colin? Was that the best you could come up with?).

Hi Jon,
My do-nuts had signs of surface cracks & stretching within a few hundred miles, they still look the same some 40,000 miles later, so I wouldn't worry too much about that, but ANY sign of de-lamination between the rubber & steel plates & I would be changing them asap.

As to what to change them for........
All variants seem to have their supporters & their detractors & there's probably no right or wrong here, just differing opinion.

Various CV conversions have been around for a lot of years now, & I think it's been proved they don't cause any more drive train component failures than had been the case with do-nuts. If you have a weakened component, the CV may find it sooner, but that's about it. My own S4 Elan has Sue Miller CV's, the PO fitted them in about 2004, did thousands of miles on them, & had no problems, even without any suspension drop restriction, which, of course, isn't an issue on a +2. However, when under the car adjusting the handbrake for MOT earlier this year, I noticed an outward dent in the tin retainer for the boot. On closer inspection, I found it had been caused by a ball that had escaped from the joint & was just rattling around in there loose. I have no idea how it got out, or how long it had been loose, but other than the dent, there was no other damage. I cleaned everything up, re-installed the ball in it's correct location, re-greased & reassembled it all & it's been fine since. I hadn't noticed anything in the way the car behaved, nor any out of the ordinary noises, so think I was lucky to notice it by accident before the ball managed to do some real damage. I shall be keeping a much closer eye on things in that department from now on, so perhaps not the 'fit & forget' that we are led to believe.

UJ's & sliding splines have again been around for years, even longer than CV's. Plenty of other marques have used them with no real problems & Lotus themselves used them on the 26R's. It's important to keep the sliding splines well lubricated & the UJ's well greased, but I know several people who have used them for years & prefer their simplicity over CV's.

And yes, the diff brace is basically a piece of angle iron, but it seems to have worked for it's intended purpose. For Colin, i suspect keeping it simple kept it cheap, & he would have liked that

Or one big one!

It's better with 3 smaller ones, because you then get 3 localised compression places.

It is also easier to fit the doughnuts to the shafts on the Bench instead of under the car.

As you can see in my photo i posted

For what it's worth I think that the spyder 50/50 solution has merits in providing some cushioning. So that's what I fitted.
I expect your existing donuts will be fine and in any event their system has robust fail safe built in.
That way the 4 you've already got should see you out.
Last edited by MarkDa on Mon Dec 04, 2017 12:07 pm, edited 1 time in total.

My car has the rdent cv shafts that I think are one of not the best cv solution as they include new output shafts rather than using the lotus ones. They are very pricey thou and id have a hard time spending that much compared with the sure Miller shafts.

My car also the chassis and hub scares from failed donut. Having the cv shaft fitted looters my stress level about potential failure.
'73 +2 130/5 RHD, now on the road and very slowly rolling though a "restoration"

One advantage of the rdent shafts is that they are longer, and therefore don't have as much angular deflection.
1967 Elan S3
1972 Europa Twin Cam
2005 Elise

I had a donut let go with the standard set up. No fail safe and not pretty.
I therefore went for the Spyder solution and it's been on for years. In fact when I bought these they were the new thing and the other CV solutions didn't appear on my radar and I didn't like the UJ's ( have them on the race car now!).
Given the options today I'd go Elantrikbits. The syder ride can still feel unconnected and of course the single donut still needs replacing every few ( small number) years.
Graeme
S4 SE
S2 GTS
Peterson JPS Exige

Got a bit of a frog in my throat.