I've decided that I must BUY a new cylinder head to get my Elan going again, and since it makes more sense to have a running car than to have various old spares (in case they might ever be needed) I think I will sell off such spares to put money into my new Cylinder Head Fund.

Before I dig them out from difficult places in my garage to clean and photograph them I'd like to know if there is any interest in anyone buying them. If you are interested in any item let me know so that I can give a more detailed report on it.

The items I can recall are as follows, but there might be a few more items when I sort things out. All these have been stored in my garage, not out in the elements.

A: A complete Lotus 3.77 Differential with the aluminium rear casing and output shafts intact. My original 1967 one. Used but working when I took it out in c1993 to fit a refurbed 3.55 diff that I had bought.

B: Standard prop-shaft for an Elan. Again my original from 1967. May need new universal joints but it was working OK when I removed it in 1993 to fit a refurbed re-balanced one. I have a recollection of having changed the UJs at least once myself, so they might actually be in quite good condition. They don't get much wear in an Elan anyway as the diff does not move much relative to the gearbox.

D: Back and front halves of an original timing case (may still have a water pump fitted). Again my original 1967 one, removed to fit a Burton Type cassette water pump in 2000. Slightly corroded.

E: Original cast iron exhaust header. Just the top bit I don't have the bottom down pipe with the expansion chamber on it or the clamp clip. Used on my car until 2000.

F: Some used clutch plates, probably not too much life left in them

H: Some hydraulic masters & clutch slaves in dire need of refurb. These will probably need reboring and lining but even so might be a better bet than some of the Chinese replica bits.

I: A brake servo in need of refurb with a very old refurb kit (the latter might have perished).

Naturally I would prefer that buyers collect rather than have me send them by courier.

You can put me down for the timing case if you like.

Well already 3 people are interested in the timing case and 1 in the propshaft and brake servo.

I don't have much idea on pricing yet.
Bill Williams

OK, here are the pictures of the Timing Case.
It does not have an existing waterpump. I think I have a spare insert 'doughnut' ring that I can include as a bonus if the buyer wants one. 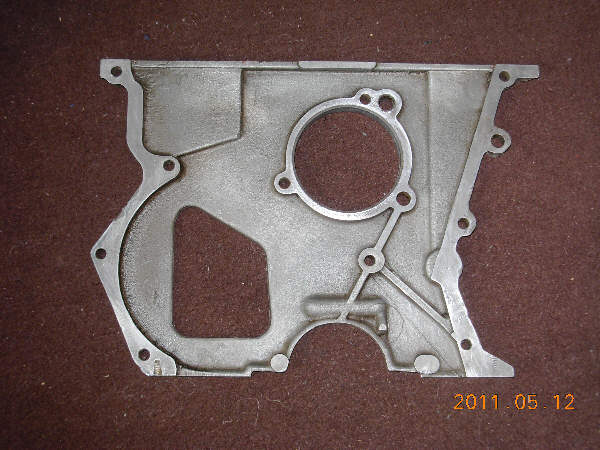 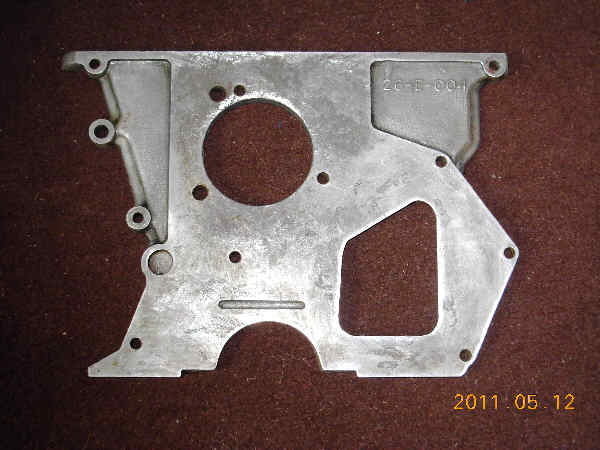 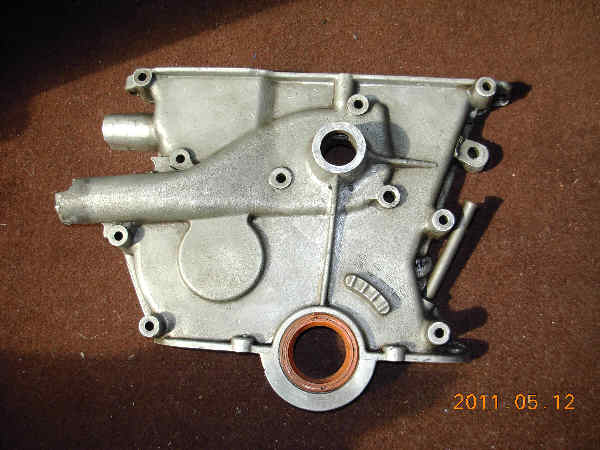 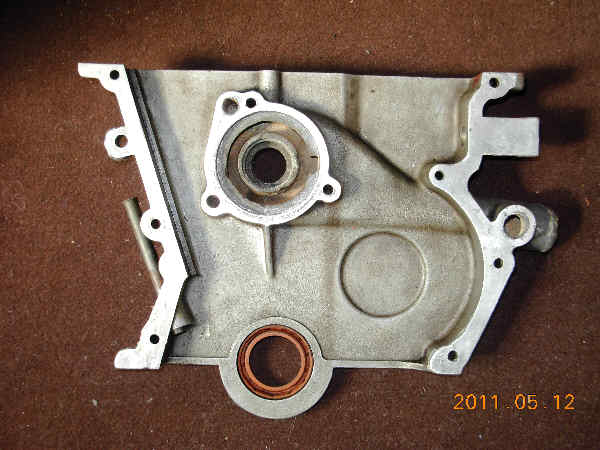 
The pump area has a bit of corrosion and a chip out of the ledge at the lug hole, but this will not prevent it working though you may need some silicon sealant on the outside of the seal mounted on the shaft. 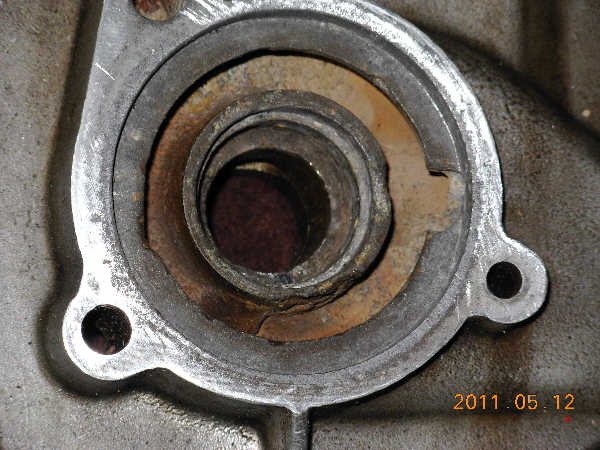 
For reasons long forgotten the front now has TWO drain holes for the 'dry' area in the waterpump; this does not affect its functionality. 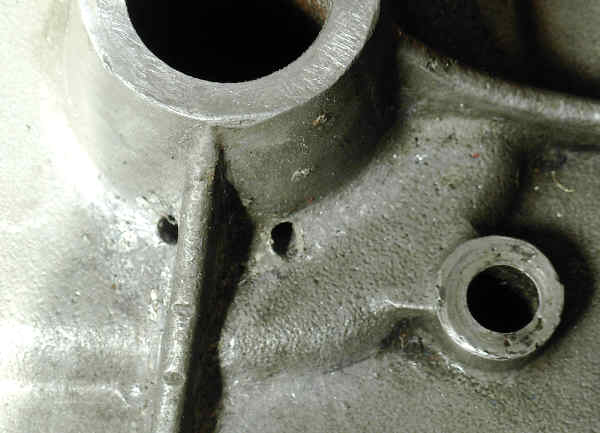 The lip of the water outlet has some corrosion and a small portion has broken away. There is sufficient left to clamp on the outlet hose, but it would be better to have a new piece of lipped tube welded on there by an aluminium welder or file the lip away and squeeze on a short piece of aluminium tube secured by epoxy and say two or three self-tap screws. 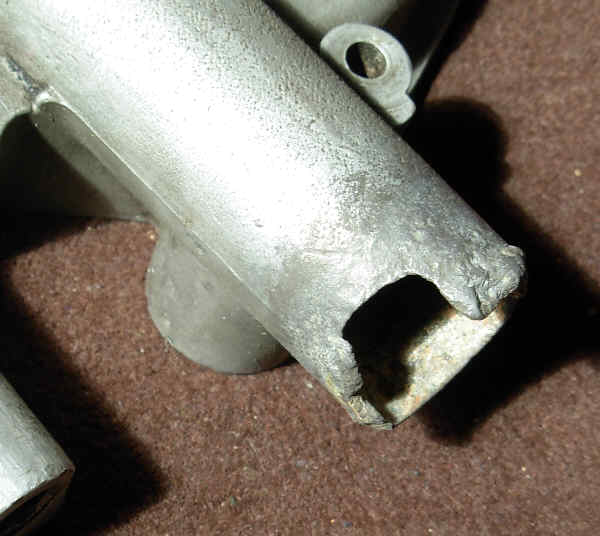 
Private sale no VAT,
Buyer agrees to add any transport/postage costs.
Can be collected from North London (muswell hill area).

An offer has been accepted for the timing case subject to satisfactory transportation being arranged.

Pics of the Servo and the propshaft will (hopefully) be posted in this sales topic later today.

Thanks Bill - that's great - will organise transport Down Under toot sweet.

I've not been able to find a spare insert 'doughnut' for the waterpump. The bit the O-rings fit on.

I think they used to come with waterpump kits, but they don't seem to appear in the pictures of current kits.
Bill Williams

OK, Here are pictures of the Prop Shaft.

It was painted (probably 1978) with gold hammerite, some has flaked away.

The original grease-nippled Universal Joints were replaced by seal-for-life U/Js at the same time.
They are still in usable condition with no noticeable play except a tiny amount of play between the OUTER of one of the bearings and its hole in the gearbox shaft. i.e the hole is a tiny bit too big, but this is of little consequence for an Elan propshaft.

There is a small amount of surface rust on the outside of the gearbox shaft giving very slight pitting, which might lead to a tiny tiny amount of oil leak from the gearbox.

The inner splines are in excellent condition. The balace weights are still in soldered in position an I belive it is still in balance.

You could fit this as it is and have many miles of service from it. 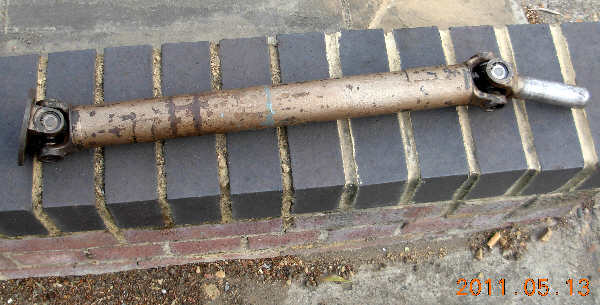 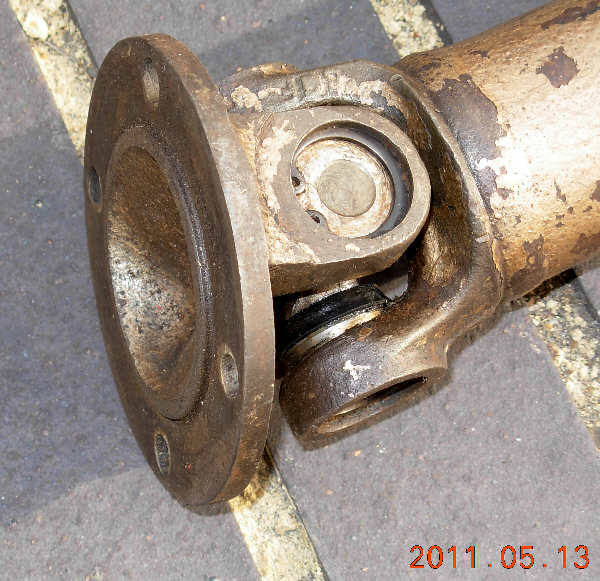 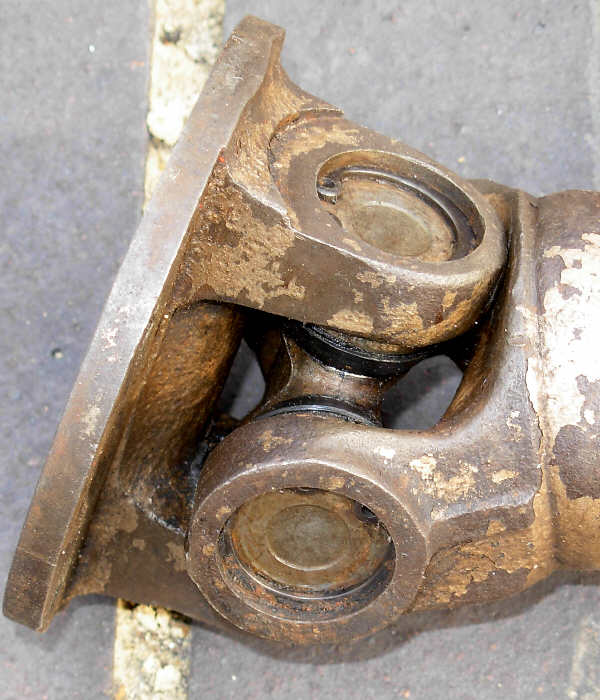 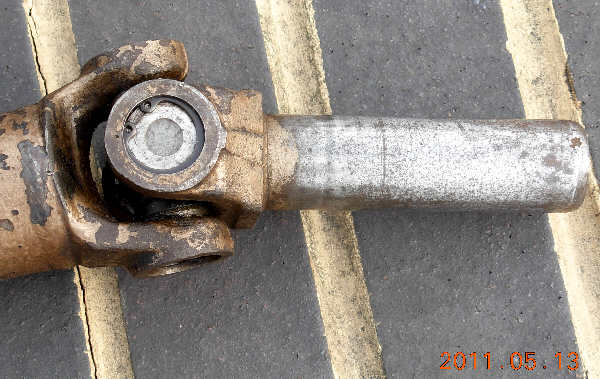 The photo above makes the minor pitting look worse than it really is, see the reflection on the smooth metal on the outside in the photo below. 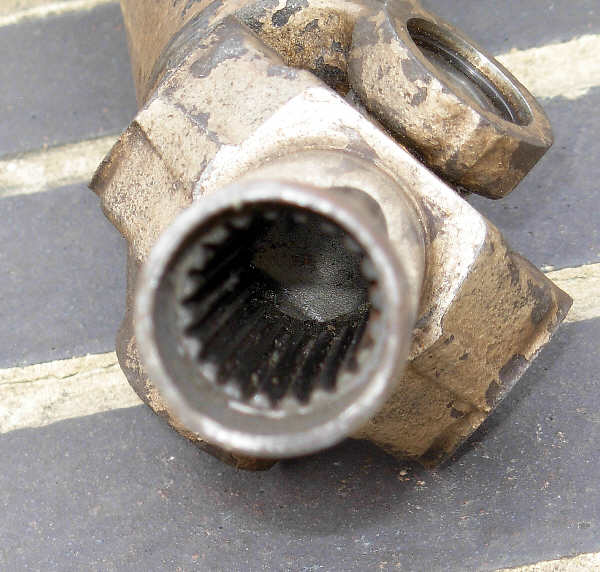 I've seen new Elan propshafts on offer at ?132+VAT =?158.40 so offers in excess of ?90 considered.
Buyer acknowledges that any transportation costs must be added to the offer.
Can be collected from North London UK, (Muswell Hill area)
Private sale no VAT.
Bill Williams

Here are the photos of the Brake Servo and its servicing kit.

The servo is the original Girling from my 1967 S3 Elan, I stopped using it and took it out of circuit many many years ago, but it remained mounted in my car until last year.


It comes complete with the mounting bracket for an Elan

The hydraulic input and output were sealed off with pinched copper tube in the standard end-fitting. Which might be difficult to unscrew.

The vacuum inlet pipe is still in place though the end away from the servo has corroded. I tried to unscrew it from the servo today without immediate success. It clearly needs to be held securely in a vice to do that. I have squirted some WD40 on all the screws to hopefully loosen them up. That WD40 shows as 'stains' in the photos.

There is minor surface rust on the outsides and minor aluminium 'rust' of the aluminium parts.

I have no idea of the interior condition, though it was working when I stopped using it many years ago. 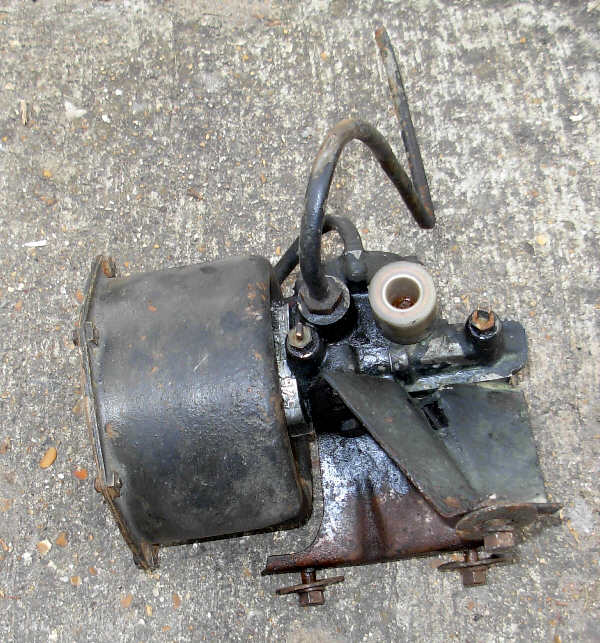 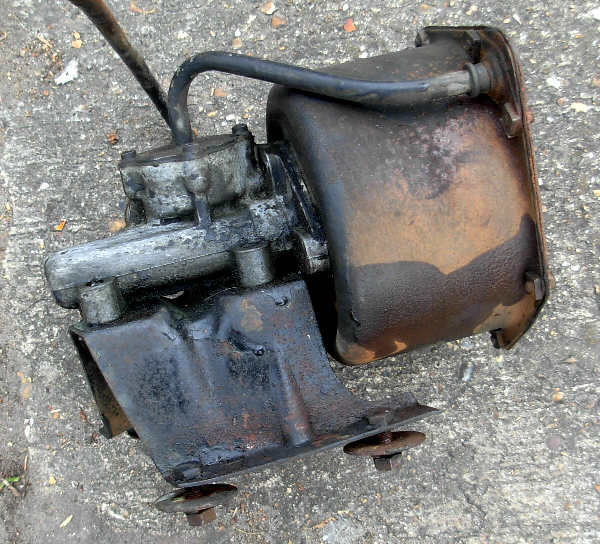 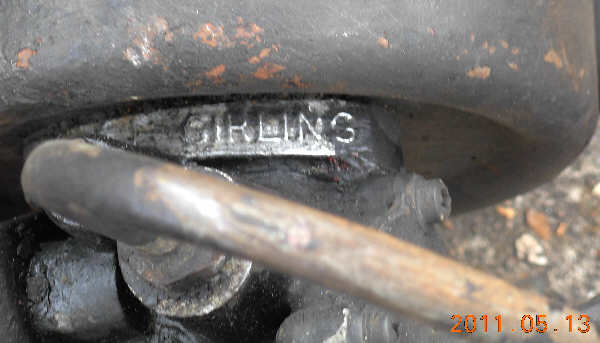 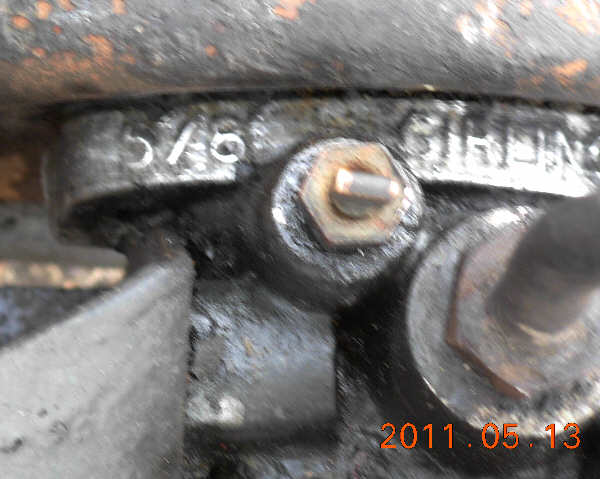 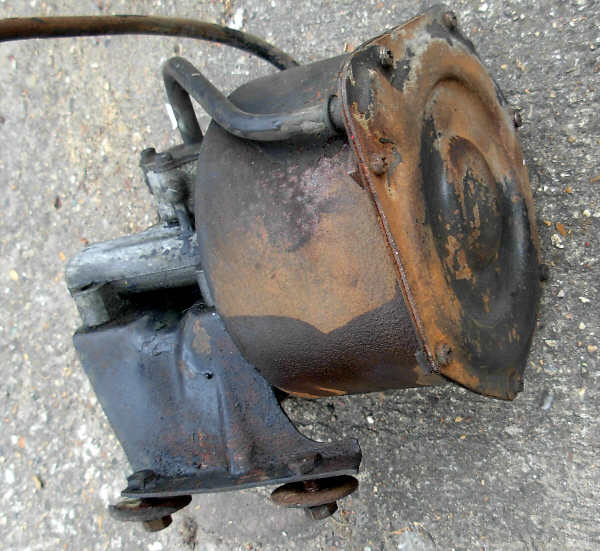 And there is a Girling Service Kit, which I bought ages ago and never used.

It has a large thin-cork gasket, a tube of lube a packet of seals & screws and an instruction leaflet. 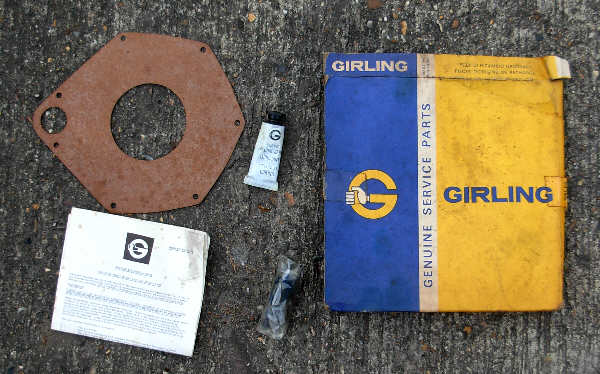 The tube of 'rubber' grease still feels fine, never opened and squishes gently OK, so it has not dried out. 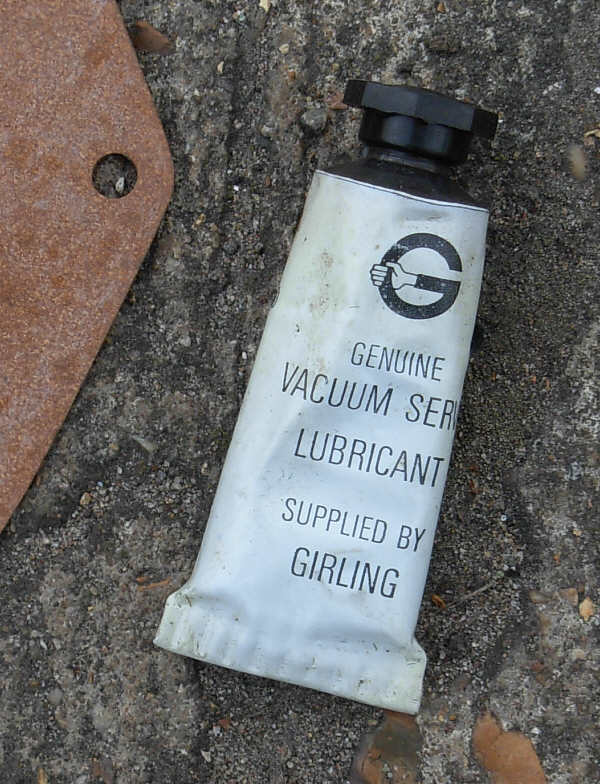 There's a packet of rubber seals and small screws that I have never opened so they should all be there. 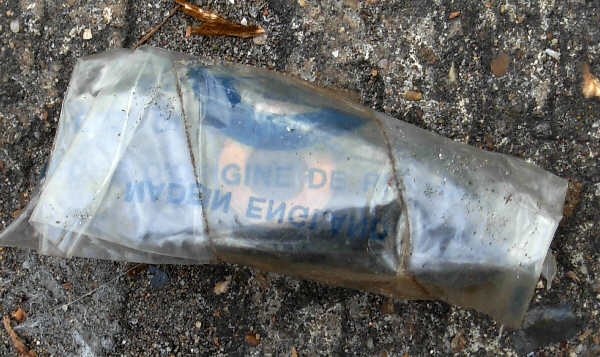 The leaflet mentions changing the air filter, but there is no replacement air filter.

And finally the servicing instruction sheet, which I've scanned and is shown below for the benefit of all Girling Servo users.


As far as I am aware these Servos are no longer available, but I have seen an advert for a refurbished Servo on an EXCHANGE basis at ?195+VAT = ?234 This makes it difficult to set a price, if nothing else my unit could presumable be exchanged at that price for a fully refurbed unit.

Substitute Lockheed devices sell for between ?146 an ?199, but would not suit someone wanting originality.

So given all those factors: for this servo, bracket and maintenance kit I'm asking for offers in excess of ?110.

Was it a member of this forum?
Bill Williams

I've been researching the sold items on ebay to come up with an asking price for my complete Lotus 3.77 Diff.

Some Ford Escort Diffs (without a rear case/axle have sold for ?132 through ?280 the highest price being for Very Good Condition.

A Lotus Alloy rear casing without stub shafts and without a diff or nose cone went for ?100.

New Stub shafts are in the ?140 area from the usual suspects. I do not know if mine have any minor cracks so I'm rating mine at ?25 each. New shaft bearings cost about ?9.60 each, but (from discussion elsewhere on this forum) I'm presuming they are best discarded if you have to open the box for refurb, so I'm not adding anything for them.

So offers around a guide price of ?275 are asked for.

Photos to follow, but it just looks like a used Lotus Diff as I do not intend to open it up before sale. It is working fine doing all the correct diff actions and has a backlash in the output shafts of about 1 or 2 degrees. The input flange is 3 and 5/8 inches 4 hole. It is complete, you could use it as is.

As mentioned elsewhere, one of these weighs about 19 KG or 42 pounds. The oil could be drained out for transport but would only reduce the total weight by about 1.5 Pounds (I think).
Bill Williams

A former offer for the above Diff has fallen through, due to excess import duty being requested in the country where it was needed, so the above complete Diff is back on offer at a guide price of ?275.

The prop-shaft shown above is also available.. offers ?
Bill Williams