What can I say,have been hankering for a Morris Minor Sleeper for many years and debating the changeover for a couple of years,I'm in no rush to sell ( so you cheeky-chappies offering ?5,000 will be ignored )...
The chassis is galvanised and the respray was done over 20 years ago ( before I bought it ) and looks good from a distance,close up has blisters etc , the number of modifications are endless including Fuel injection and ABS braking, Most of which are reverseable.
This posting is scant as I'm in no hurry to sell ( yet ) as I don't have room for two toys but any more details you need just ask , all questions will be answered.

Not hacked....and after the sale there will be a big pile of Lotus bits to go...engines,gearboxes ( 4 and 5 speed ) heads etc,etc,etc.

P.S. Nearly did this a couple of years ago and put it down to the winter blues...

John,
Don`t do it, don`t leave us, we need you. Your support and advice has been a great help to me.
The minor people don`t need you like we do, and anyway there are hundreds of them.
Eric in Burnley

What's a Morris Minor Sleeper, John? Is it an ex-GPO van for weeny people? A timber-framed estate for the tired vicar or just a moggy that needs waking up? A chum had a saloon a few years back that he popped a Vauxhall 2 litre twin cam in, with 5 speed box, sorted suspension and brakes, and it was gorgeous! LOL how can that be mistaken for a stock Moggie I appreciate that the highly modded car is probably a US car so our rules don't apply but I've always wondered how they can be road legal. No clear view of the road ahead and exposed moving parts must be a hazard to anyone daft enough to put a hand near them never mind should they hit a pedestrian with that solid lump in the front.
Steve

bit like the 2cv van that's actually an Esprit Turbo underneath

For the person who does not know which way to go: this was the Esprit CV 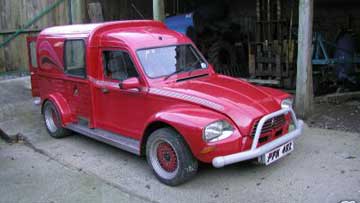 More power to you, John, literally. It doesn't sound like you need more inspiration but here's a project I've been watching for awhile. Mad fabrication skills. Careful though, you can lose a half a day watching if you start at episode 1.

Project Binky...
http://www.badobsessionmotorsport.co.uk ... ect-binky/
Bud
1970 +2S Fed
"Every Lotus that an owner modifies makes yours worth that much more." - You're welcome!

Ahh! project Binky.......I forced myself to stop watching it about a year ago because I was losing some much time

I do not want to let her go till after Castle Combe ,May 2017,unless someone starts waving silly money in my face , till then one has plenty of time to peruse , ask , think , ask the wife or even ask me for further details ,and she will have a new 12 month MOT.

Classic good looking car, puts a smile on my face whenever I drive her, reason for selling, I have an urge for a Sleeper Morris Minor ( senile dementia setting in. )


After Combe I want to remove the Fuel Injection and ABS system ( for my Moggie Sleeper ) and refit the original Dellortos , at that time you have the choice of retaining the 5-speed box or re-fitting the original Ford 4-speed gearbox . I would also like to remove the Gear reduction starter and Quaife ATB diff and replace with the good originals, unless agreed otherwise?.
Likewise original seats or MR2 your choice
Choice of uprated 4.25 or original 3.0:1 Servo.

Model History
From humble beginnings working from a little lock up in North London during the 1950?s Chapman and his Lotus cars had a meteoric rise both on and off the track. The original ?baby? Elan was launched in 1963 and was an instant success. Its design for a road car was like Chapman?s race cars - way ahead of the competition. It was light, nimble with good power for a small car and the handling as we know, was sublime. Whilst sales of the baby Elan were excellent, Chapman, never one to sit still, was looking to the future and bigger markets for his road cars. Chapman wanted a more up market model and one that could cater for the family man with young children in mind. And so, by 1964 the Lotus Elan +2 was on the drawing board. The principles were the same as the baby Elan, steel back bone chassis with independent suspension and disc brakes all round and a fibre glass body. However to cater for the extra rear seats and the more luxurious interior the chassis was lengthened by 12 inches, the track widened by 7 inches and the body length was increased by 23 inches.
With two, Formula One World Championships under his belt by now, Chapman launched the Elan +2 in 1967. Whilst the +2 was a little heavier than the baby Elan it was surprisingly similar in performance, thanks to an increase in power and the excellent aerodynamic shape of the body that had a very impressive drag coefficient of just 0.3. What perhaps Lotus themselves had not envisaged was the +2 was in some ways a better handling car than the baby Elan. By catering for the family man and widening and lengthening the original design Lotus had inadvertently produced a beautifully handling car that was more sure footed and in some was easier to drive than the original Elan. The Elan +2 carried on in production until 1974 by which time various improvements had been made to the excellent original design.

Driving experience
Modern day car manufacturers involved in current F1 say that their technology from this cutting edge sport finds its ways onto its road cars which I have no doubt to some degree is true. Looking back now, what is without question is back in 1964 when Colin Chapman started to design the Elan +2 he was at the cutting edge of race and road car design. He had just won his first Formula One World Championship with Jim Clark in the Lotus 25 and would go on to win his second a year later in 1965. The cross over from the track to road cars was quite obvious in his design input ? and it shows to this day when you drive a Lotus Elan + 2.